Now you see it…  Now you don’t.  The government’s rustled up a party trick for the kids this Christmas. They’re going to make 3.7 million of them disappear.

Britain’s children aren’t going anywhere, of course, particularly those who are growing up poor. But with a legislative sleight of hand, the government plans to quietly give up on the targets to end child poverty enshrined (with cross-party support) in the Child Poverty Act 2010.

All this is more than a little politically convenient.  Apart from a solitary BBC Today programme interview with Iain Duncan Smith last year, which left presenter Evan Davis audibly flabbergasted, not even the Government claims it is on track to meet the child poverty targets.

Indeed, the latest available projections, from the Resolution Foundation, warn child poverty will rise from 2.3m children to 3.3m by 2020 – a figure that will be even higher once the poverty-producing impact of the Summer Budget and the Autumn Statement is totted up.

I suppose there may be a few chimneys left for them to sweep and the poverty will keep them small enough.

Craig Murray has an excellent article on how the Left can win.

“A Daily Mirror opinion poll following a BBC televised Labour leadership candidates’ debate this week had Jeremy Corbyn as the clear winner, with twice the support of anyone else. The media ridicule level has picked up since. This policy of marginalisation works. I was saddened by readers’ comments under a Guardian report of that debate, in which Labour supporter after Labour supporter posted comment to the effect “I would like to vote for Jeremy Corbyn because he believes in the same things I do, but we need a more right wing leader to have a chance of winning.”

There are two answers to that. The first is no, you don’t need to be right wing to win. Look at the SNP. The second is what the bloody hell are you in politics for anyway? Do you just want your team to win like it was football? Is there any point at all in being elected just so you can carry out the same policies as your opponents? The problem is, of course, that for so many in the Labour Party, especially but not just the MPs, they want to win for personal career advantage not actually to promote particular policies.”

Continue ReadingCraig Murray on how the Left can win

23.17 edit: If I had a vote, Jeremy Corbyn would most certainly – without any doubt – have it.

I’ll get up to speed on this. They’re rich. They believe that the rest of us are scum that should not be encouraged to breed.

Continue ReadingI have seen the rich scum in London

We’re NOT all in this together: the story of the closure of the Independent Living Fund from Moore Lavan Films on Vimeo. 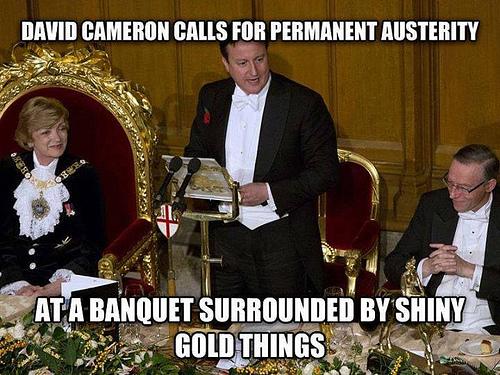 Fingers those responsible for the financial collapse of 2008. US and UK Neo-Cons are identified.