“Shame on you for turning Blue” 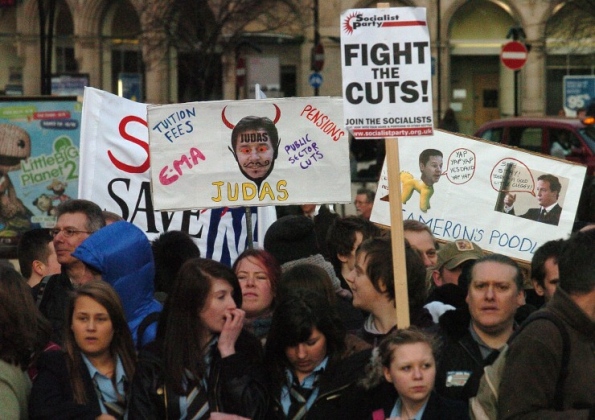 Many protests are expected at the Liberal-Democrats Spring Conference at Sheffield.

Thousands of protesters will overwhelm the Liberal Democrat conference in Sheffield tomorrow in an attempt to derail the party’s love affair with NHS privatisation.

Police predict that up to 10,000 protesters including health workers and campaigners will vastly outnumber the 2,000 or so delegates expected to attend the Lib Dems’ spring conference at City Hall.

A two-and-a-half-metre-high “ring of steel” has been built outside the conference centre as part of a police security operation reportedly costing £2 million.

Speaking at an anti-cuts rally in Sheffield tomorrow (Saturday 12 March), Unite general secretary Len McCluskey is expected to say: “It’s time for Liberal Democrats to break with the coalition and come over to the side of the British people.

“Nick Clegg has turned Lib Dems into shock troops for a Tory counter-revolution that aims to dismantle everything ordinary British people have built up over generations – the NHS, the welfare state, the very fabric of our communities threatened by the cuts.

“We know that Lib Dem voters reject the course he has chosen. Polls and by-election results – not least in Barnsley up the road – tell us that. But I have come to Sheffield to appeal – not to Nick Clegg – but to Lib Dem councillors, activists and, yes, Lib Dem MPs, to put the people first, put their consciences first and come over to the opposition where they will find a warm welcome.”

Traditionally going first in the conference season, it’s going to be the Lib Dems turn to get it in the neck this week in Sheffield. Two marches are planned against the mini-me of the Condem alliance, firstly on Friday at 4.30pm at the town hall and then on Saturday, meeting at 11am at Devonshire Green.

Also planned is a mass walk-out from schools on the Friday, under the slogan, “Against a government of millionaires making thousands unemployed and starving the poor to pay for a crisis created by the institutions of the rich”.

According to reports on Sheffield Indymedia known activists have been put under surveillance by an increasingly nervous police force.

HUNDREDS of protestors marched on Sheffield’s City Hall this evening as, inside, the Lib Dem Spring Conference got underway.

The mood was angry as the crowd voiced their concerns about tuition fees and public spending cuts, shouting: ‘Clegg Clegg Clegg, out out out!’ and ‘Shame on you for turning blue.’

There was a strong police presence at the eight foot metal fence surrounding the perimeter of the City Hall, which protected the delegates as they arrived for the three-day event.

This Saturday is decision time for the Liberal Democrats. Will the party back market reforms that put the NHS at risk, or will it listen to the record number of delegates who wish to amend them?

The Lib Dems uniquely still allow party members to decide policy, and do so in public. The motion from the leadership at our conference welcomes the declared aspirations of Andrew Lansley’s healthcare reforms, and then seeks to justify them with dodgy statistics that depend more on eating and smoking habits 20 years ago than any previous structural reform. It fails to even start to mount a defence of the marketisation aspects of the health and social care bill, and is unable to identify any true increase in democratic accountability, let alone local control.

So it’s no surprise that the amendments Shirley Williams and I have tabled calling for proper accountability and safeguards against privatisation have attracted such support from delegates.

This Friday teatime saw a lively gathering of over 500 protesters around the ring of steel erected by the police in Sheffield city centre. This was the warm up for the main demo tomorrow (Saturday 12th assemble 11am Devonshire Green) when police are predicting 5-10,000 on Sheffield’s streets. It must have seemed a great idea months ago when they booked their spring conference in Sheffield. Clegg was once relatively popular in his Sheffield Hallam constituency and the council is Lib Dem controlled – for now. But they are probably regretting the decision now.

Sheffield people have good reasons to hate Nick Clegg and his party along with the rest of the country – Sheffield has two big universities and thousands of public sector workers. It is also one of the most unequal of Britain’s cities with areas of considerable wealth (e.g. the west of the city – Clegg’s Sheffield Hallam constituency) contrasting with areas of great deprivation where people rely on public and community services to get by. There was also the Forgemasters betrayal, where the Coalition cancelled a major investment deal which would have revitalised the local steel industry. The Lib Dem council is now busy cutting vital services and funding to the voluntary sector – this will hit Sure Start provision, Advice Centres, youth services and much more, with hundreds losing their jobs in the council, vacant posts remaining unfilled, and many more jobs affected in the voluntary sector and in arms length agencies providing services on behalf of the council.

Yet so scared are the Lib Dems at facing their critics that the Council and the police have agreed on making the centre of our city into a huge no go area, surrounding the City Hall with a double layer of steel fencing and a huge numbers of police – an operation that is costing £2 million! Tonight, people let the delegates know what they thought of them – a young and lively crowd of students and workers, some in Clegg masks, shouted ‘Judas!’ and ‘scum!’ and ‘you won’t be in parliament next time’, until we were hoarse.

The first day of the Liberal Conference in Sheffield was met by protests [ 1 | 2 | 3 ] outside the Town Hall starting at around 4pm. At around 4:45pm the protest moved up to Barkers Pool and proceeded to chant at the conference delegates outside the City Hall. The protest then moved to the top of Barkers Pool, at the bottom of Division Street and got noisier. A critical mass later in the evening brought Ecclesall Road to a complete standstill. The Star reported that there were 800 protestors and has posted a video and a timeline of the protest.

A convergence space has been opened on The Moor in the shop next door to Debenhams[ photo].

A far bigger protest is expected tomorrow, assembling at 11am on Devonshire Green, however a warning that it might be kettled there has led to a call to meet outside the Town Hall instead. See the Massive Protests Expected at the Liberal Democrats Spring Conference in Sheffield feature article for more details

Nick Clegg has sought to steel his Liberal Democrat activists to face demonstrations outside their party’s spring conference, telling them at the opening rally that being in government meant they must get used to protest.

The party, he said, had to realise they had “put down the placards and taken up the reins of power”.

Some 3,000 activists, the highest number ever, have registered for the conference in Sheffield, where Clegg is MP for Sheffield Hallam. It is the second since the party entered government, and a test of its ardour for the coalition. Its latest poll rating this weekend was 9%.

POLICE say providing security for the Lib Dem Spring Conference in Sheffield is the ‘biggest operation’ they dealt with since the 2007 floods.

But protesters have attacked the scale of the £2 million operation.

Around 1,000 officers are being deployed this weekend, with the force adopting a heavy presence to deter violence.

LIB DEMS: A funny business going on in Stalag Sheffield – Columnists – The Star

THE ‘All Businesses Open As Usual’ sign is blocked from view by half a dozen yellow-jacketed policemen, writes Features Editor Martin Smith.

Clearly this is far from business as usual.

Sheffield doesn’t normally have 1,000 policemen from three different forces on the streets.

It doesn’t have the 8ft Stalag Sheffield steel and concrete fence around the City Hall and it doesn’t usually have deserted department stores on a Friday afternoon.

Nick Clegg has warned Lib Dem activists they must get used to protests now they are in power, in a speech to the party’s spring conference in Sheffield.

Thousands of students and trade unionists are expected to stage a protest outside the conference later.

And some Lib Dems are expected to turn their fire on the deputy PM over the planned shake-up of the NHS.

In an emergency motion, former MP Evan Harris, a member of the party’s influential federal policy committee, will call on Lib Dem ministers to resist the coalition’s plan to give 80% of the NHS budget for commissioning services in England to GPs.

This entry was posted in NHS, politics. Bookmark the permalink.