Postman Paul Firmage, one of only 368 employees to have turned down the £2,200 of free shares, says they are ‘little more than a bribe’ 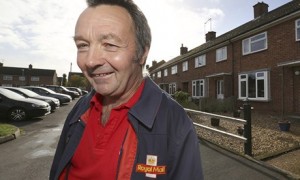 One of them, Paul Firmage, 59, described the free shares as “little more than bribe” and said he refused to take the shares as a “matter of principle”, even though they could be worth more than £2,600 by Friday if the stock rises by 20% or more as predicted.

“I know my refusal to take the shares won’t make much difference, but it is a matter of principle. I’ve always been opposed to privatisations. It’s a step backwards,” he told the Guardian. “Only those at the top – the snouts in the trough brigade, the corporate executives and the speculators – will win. We, the postmen and women on the ground, will lose.”

Firmage, 59, from Downham Market, Norfolk, admits that others think he is silly for not accepting the shares despite his principles. “Yeah, I could have taken the money and still been opposed to it, but principles are principles.

“Some people think it is amazing to turn down £2,000, but I’m looking at it from a long-term point of view – the service will rapidly deteriorate. When it’s private they can cut back on pay and conditions. Our conditions are quite good at the moment.”

He conceded that he might have thought differently about taking a principled stand if he had had a family to support. “I’ve got an older brother, but no other family,” he said. “If I had a family around me I might have a different view.

“[Royal Mail] has always been a public company and there are some things that should be beyond privatisation,” he said. “It’s a state service – it should remain a state service.

“Everything these days is geared towards money. We’ve seen the water companies, the energy companies, the railways, all go. You’ve only got to look at the stock exchange to see everything that used to be ours.”

Firmage, who has been a postman for 11 years, said many colleagues had said they were also going to turn down the shares in protest, but “[the company] hit us with a lot of propaganda”.

The rejected shares will be redistributed between the 150,000 staff who have accepted the shares, which they must hold on to for at least three years.

The 368 figure includes all eight of Royal Mail’s non-executive directors, who are not taking part in the free allocation.

MPs summon bankers to explain their valuations of Royal Mail

Cameron and Osborne millionaire Tories attack the most vulnerable