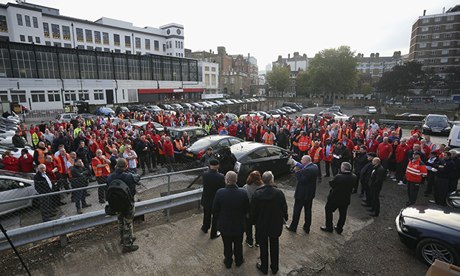 The Royal Mail is offering a £300 bonus to any of its 150,000 staff who cross the picket line in any forthcoming nationwide postal strikes.

Moya Greene, its chief executive, wrote to all employees before Wednesday’s strike ballot result to offer the sum if they continue working while colleagues are out on strike.

… <about shares being ridiculously undervalued >

Greene’s last-ditch attempt to avert the first nationwide strike in four years came as the Communication Workers Union (CWU) said it was confident workers would back industrial action when it announces the results of a strike ballot on Wednesday afternoon.

Postal workers described her offer as an “act of desperation and discrimination” and a “scab bonus”. Paul Firmage, one of the 371 of Royal Mail’s 150,000 staff to rejected free shares in the privatisation, said the £300 bonus was “yet another bribe”.

“They are offering people money to be a scab. It is a scab bonus,” he said.”

The CWU said: “It’s an act of desperation and discrimination. We believe it’s irrelevant and will make no difference to the strike ballot.”

In a consultative ballot this year 96% of postal workers were opposed to the privatisation, which they said will erode their pay and conditions.

If staff have voted in favour of industrial action, the first strike could take place on 23 October and would likely be followed by a series of rolling strikes in the runup to Christmas.