Britain is an extreme oddity regarding privatisation: nowhere else in the advanced world is there such a willingness to sell everything that isn’t nailed down. Time and again the British public is ripped off and sold out by its leaders. 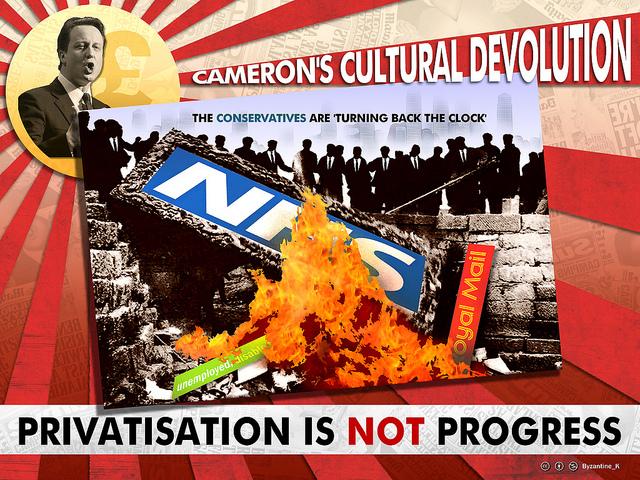 A few weeks ago, London was the scene of a heist of spectacular proportions. We may never know the full extent of what was stolen, but the indications are that it was anywhere between £1 billion and an eye-watering £6 billion. Although the robbery was carried out in broad daylight, it is unlikely the money will ever be recovered or the perpetrators brought to justice. This is because they were sitting in some of the world’s largest financial institutions – Goldman Sachs, Barclays, Bank of America and UBS – and acting on behalf of the British government.

Their instrument was the undervaluation of shares in Royal Mail, which with the initial public offering immediately soared from 330p to above 500p. The company was sold at £3.3 billion but in J.P. Morgan’s estimation the real value may have been as high as £10 billion. No wonder the IPO was oversubscribed. It was, as TUC General Secretary Frances O’Grady pointed out, akin to “selling five pound notes for four quid.” The biggest private shareholder is now the hedge fund TCI, which snagged 5.8 per cent of the company. The principal victim of this daylight robbery is, of course, the British public.

There has been plenty of public and media commentary – and even a little outrage – at this latest instance of the looting of Britain’s dwindling public sector. After all, even Margaret Thatcher was “not prepared to have the Queen’s head privatised.” The sell-off was conducted in the teeth of sceptical public opinion as well as fierce opposition from postal workers, with 96 per cent opposed in a recent ballot. Billy Hayes, General Secretary of the Communication Workers Union, denounced the manner in which a centuries-old public company, returning regular profits to the Treasury, was “flogged on the cheap for no good reason.” Postal workers have voted for industrial action, seeking guarantees on pay and working conditions.

Missing from most of the discussion, however, is any recognition of just how extraordinary all of this is. Business Secretary Vince Cable may have faced some tough questions about the handling of the flotation but it will blow over. No heads will roll. Asset-stripping of the public sector has become a fact of life. Even among the British left, battered by the serial privatisations of the 1980s and 1990s, there is a certain wearied resignation, a sense of going through the motions in the face of the seemingly unalterable order of things.

We should resist this normalisation. Viewed from an international perspective, Britain is an extreme outlier regarding privatisation. In no other advanced industrial country would quite so flagrant a rip-off have been engineered and tolerated. Nowhere else – not even in the corporate-dominated United States – is there such a degree of nonchalance about ownership and control over vital infrastructure and public services. In the UK, the attitude seems to be that if it isn’t nailed down then it is for sale. Privatisation is increasingly the British disease.

From Pinochet to perestroika

Privatisation has been a prominent feature of the British political landscape for decades, but on the basis of an assumed international policy consensus about how to improve efficiency and economic performance. It is true that, since the 1980s, privatisation has been a key instrument in the toolkit of neoliberal globalisation, enforced from Latin America to Asia to Africa wherever the writ of the IMF and World Bank could be made to run. By 2009, 132 of the world’s 500 most valuable corporations were privatised former state enterprises. But within this neoliberal framework, very few countries were actually prepared to go quite so far quite so fast as the UK.

In a 2002 encomium to privatisation, HM Treasury calculated that, all told, between 1980 and 1996 Britain had racked up fully 40 per cent of the total value of all assets privatised across the OECD. This is an astounding figure. Elsewhere, the only remotely comparable experiences occurred in countries – Pinochet’s Chile and the disintegrating Soviet Union – that were undergoing exceptional transitions and in which the rule of law was basically inoperative.

Chile was the original laboratory. Between 1975 and 1989, under the jackboot of the Pinochet regime and at the urging of carpetbagging Chicago school economists, the country implemented two waves of privatisation. Not merely companies nationalised by Allende but a host of older public concerns – including 16 banks and thousands of mines, real estate holdings and agricultural enterprises – were auctioned off to elites at bargain-basement prices.

Given the accolades afforded the “Chilean miracle” by Milton Friedman and others, it is worth noting that the first wave of Chilean privatisation was a major embarrassment. All but five of the banks and many of the other enterprises failed and had to be taken back into public hands. By 1983 the government-controlled portion of the economy again equalled that under Allende, and critics mockingly referred to a “Chicago road to socialism.” (The second wave of privatisation, beginning in 1985, eventually returned many of these firms to the private sector).

Road tested in Chile, privatisation was then exported out across Latin America and worldwide. Under Margaret Thatcher, Britain served as the most prominent conduit and cheerleader. With free market economists again hectoring from the sidelines (see Thatcher’s correspondence with Hayek), all memory of capitalist mismanagement of factories and mines in the interwar years was forgotten as the commanding heights of the economy – electricity, gas, water, steel, civil aviation, telecoms and railways – were delivered up for auction. It was a massive transfer of wealth from public to private interests, marketed to the people with soothing promises of a shareholder democracy.

As with Royal Mail, the brazenness of the theft was stunning. In his magnificent recent book on public ownership, Andrew Cumbers, Professor of Geographical Political Economy at the University of Glasgow, found “considerable evidence that state assets were sold off at remarkably cheap prices.” Shares in BT jumped from 130p at privatisation to £15 by 1999. Railtrack was sold for £1.9 billion, but within two years had soared in value to £8 billion. The rolling stock company Porterbrook Leasing, privatised for £528 million, was re-sold just eight months later for £826 million, while the other two rolling stock companies were subsequently sold for £900 million more than their privatisation price. The architects of privatisation could barely be bothered to disguise what they were up to. Former Chancellor Nigel Lawson went so far as to state in his memoirs that undervaluation was a deliberate government tactic.

Hugely important strategic considerations were at work, as was evident in the subsequent development of the UK economy. Privatisation not only allowed for attacks on the trade unions but also – together with big bang deregulation – contributed to the build-out of London-based capital markets. The £3.9 billion rollout of shares in BT in 1984, for example, was six times bigger than any previous IPO and four times the size of any other capital-raising exercise in the world at the time. In this way, the privatisations of the eighties and nineties helped secure the City’s continuing place as a world financial capital.

In addition, the sale of 2.5 million council houses at a total value of £86 billion – more than all other privatisations combined – helped generate the real estate boom and (as Stephen Wilks notes) ultimately contributed to the property credit bubble. Revenues from the sale of other public assets – totalling £69 billion between 1979 and 1997 – allowed successive Tory governments to maintain public spending while cutting taxes for short-term electoral gain. Leon Brittan insisted that “people always overestimated Mrs Thatcher’s grasp of economics while underestimating her grasp of politics.”