While I’ve tried to avoid items about myself and Gonzo journalism in recent years, this does raise important health and safety (!) issues.

I’ve wanted a yacht for many years and I’ve done a couple of sailing courses the last of which didn’t go very well but that’s another story.

Sailing can be dangerous and a responsible sailor should try to manage and minimise potential dangers. This is about planning a route with contingencies like the nearest safe ports to head for if you get into trouble, paying attention to weather and shipping forecasts, how to manage hull breaches by stuffing a cushion in there and keeping your weight on it, how to use the radio to summon help if needed, making sure that you have essential safety equipment and ensuring that your boat is safe and seaworthy. The skipper, captain or master is responsible for everybody’s safety on board. It may come easier to me since I’m concerned for my safety being a vulnerable road user riding motorcycles and bicycles – I’m already very concerned with managing and minimising danger.

A few weeks ago I bought a small yacht on eBay. I hadn’t viewed it which is obviously a mistake but it was just what I wanted – a cheap, small, scruffy little yacht with a long keel and a diesel inboard motor. It was described as only needing tidying up … “in resonable[sic] condition, just needs someone to give her some Tlc cosmeticaly,[sic] in fact, she is ready to sail away to your home port without any work doing to her now.”

She was described as totally seaworthy and only needing cosmetic attention. Small yachts like this have crossed the Atlantic. She should certainly be capable of sailing around Britan and Ireland and across the channel and to the Med. Being cheap she would probably be bought by a novice sailor as a first yacht to learn on as I intended.

Since there was nothing wrong with her I bid most. I sent off 10% deposit and more for a month’s mooring because I couldn’t go to fetch her straight away. I was excited – I bought a good, expensive life jacket, a couple of fire extinguishers and a fire blanket and some simple fishing tackle to catch some mackerel suppers.

While I’m planning to go fetch her and bring her back I’m looking at the photos repeatedly. Then I notice something very wrong. 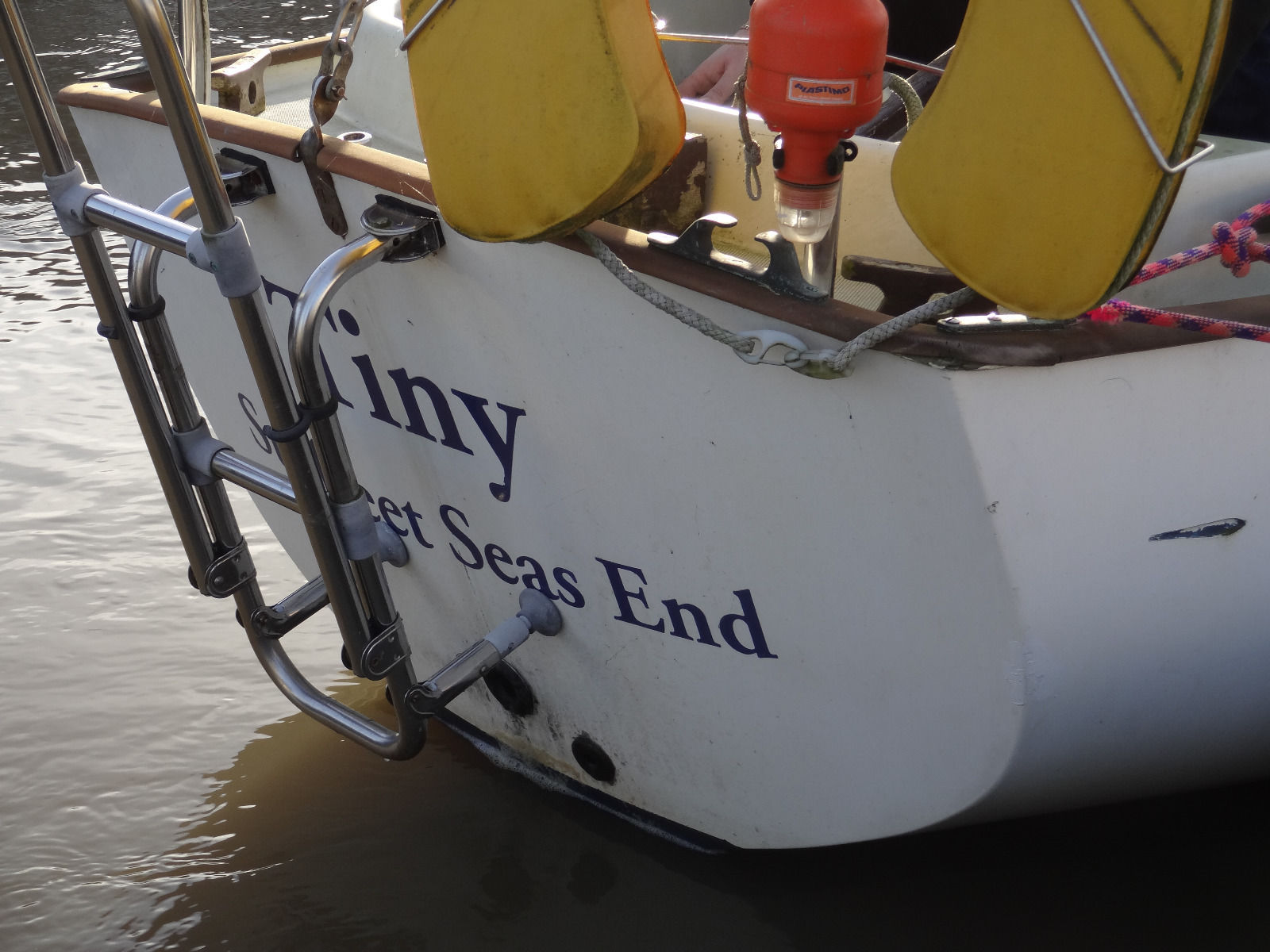 Hopefully, you should be able to click on the image to enlarge it to full size – just like I hadn’t done previously. Notice the damage to the gunwale (pronounced gunnell) at the corner of the boat? That’s had one hell of a smack – looks like it’s been smashed against the rocks or something similar. Notice the nasty ‘polyfilla’ further down on that corner? That’s certainly far more serious than “only cosmetic”. That gunwale is not going to deform like that without all the fibreglass in that corner needing repair. Don’t take my word for it – show the photo to someone you know who sails or knows about fibreglass. Some of you can do edge-detect far better than me.

I ask the seller about the damage in that corner. He pretends he doesn’t know and that there is no damage. I tell him that I am seriously concerned that the boat is unsafe, the sale’s off and send him this photo.

The seller relists the boat on ebay – it’s for sale now – describing it identically to the original listing except that the image showing the damage is missing. There is now no chance of noticing this damage without inspecting it in person. Would somebody inexperienced and excited at buying their first boat notice it even in person?

I managed to warn people by writing a poor review: “Structural impact damage aft starboard gunwale and possibly fibreglass”. Ebay took it down after a day or so. There is no easy way to contact ebay about this and I expect them not to care.

You may think it’s only a little damage but it’s not. It’s not like a little bump to a car – it’s more like two cars getting chopped up and welded together badly. It could fail catastrophically.

Like I said, a cheap boat like this is attractive to novice sailors. It is also very unlikely to be surveyed.

The new owner might take their family out. Many people only wear life jackets in perceived danger. In their panic and inexperience they’ll go for lifejackets instead of getting a mayday call out. The boat sinks in two to three minutes. People die of hypothermia in 15 – 20 minutes.

Shill bidding evidence. This is only a quick analysis that shows shill bidding – bidding fraud that inflates the price on ebay.

While this evidence is not definitive, I suggest that it proves my case beyond reasonable doubt. I do hope that somebody picks up on this and prosecutes him.

2 yachts were sold by the seller at the same time. They are very different yachts – a cheap, scruffy worn-out 22 footer with damage deliberately hidden by the seller sold for about £750 and a far more luxurious 26 footer sold for £6000. It would be very surprising for anyone to bid on both of them, but yet …

I expect ebay to do absolutely nothing.