The Royal College of Physicians (RCP) , representing hospital doctors, has chosen to ballot its 26,000 members on the Health and Social Care / Destroy the NHS Bill.

At the Royal College of Physicians, we believe the NHS bill is beyond repair

We were told that this bill will make the NHS less bureaucratic, more cost effective and provide more choice for patients. It won’t

Today the Royal College of Physicians joined the growing ranks of opposition to the government’s health and social care bill.

We were told that the bill would make the NHS more efficient and more cost effective. It won’t. Management costs in the NHS are about 5% of the total budget. In the US healthcare system, where the market rules, they are above 25%. If the bill is passed, management consultants such as McKinsey and KPMG will make millions from the NHS budget “advising” clients on both sides of the purchaser/provider split, with additional contracts “advising” government and health regulators how to cope with the tangled web of contracts the new system would create.

We were told that the bill would make things less bureaucratic. It won’t. It will replace three layers of management in the NHS with at least six new ones, and a seventh if you count the health and wellbeing boards to be established at the local authority level. For example, 152 primary care trusts will be replaced with well over 200 clinical commissioning groups. Almost half the staff of primary care trusts have already gone, but many are returning to work for the commissioning groups and commissioning support services, often as consultants on a higher rate than their previous salaries.

We were told that the bill was essential to control spiralling healthcare costs. It isn’t. Britain spends less per head on healthcare than most other European Union countries, and far less than the United States. Market competition in health is inherently wasteful, because it implies the existence of spare capacity in the system. It is likely to drive up costs for each patient, as charges for healthcare have to rise to ensure that providers can carry the costs of under-used people, building and equipment.

We were told that the bill means more choice for patients and more control over their healthcare. It doesn’t. Instead, it will strain to breaking point the essential relationship of trust between doctors and their patients. GPs in particular will be put in the invidious position of having on the one hand to diagnose their patients and recommend the best course of treatment, and on the other hand to refuse to supply it because as commissioners their budgets are under pressure.

For all these reasons and others, doctors, nurses and other health professionals have finally concluded that the bill is beyond rescue. Opinion polls show that view is shared by a large majority of the British public.

NHS care to be severely rationed. People will need health insurance like the United States.

Services are already being pulled in an unannounced, piecemeal way. If the bill passes, the health secretary won’t be accountable

Under the bill the range of what is available for free seems certain to contract further. Commissioning groups will have fixed budgets. The for-profit “support organisations” that are being lined up to do most of the commissioning for them will have a strong incentive to limit costs, and therefore the treatments to be paid for. CCGs also look likely to be free to decide that some treatments recommended by hospital specialists are “unreasonably” expensive, and refuse to pay for them, as health maintenance organisations do in the US.

A core of free NHS services will remain, but they will be of declining quality, because for-profit providers will cherry-pick the most profitable services. NHS hospitals will be left with the more costly work, so staffing levels and standards of care will be forced down and waiting times will get longer. To be sure of getting good healthcare people will increasingly take out private insurance, if they can afford it. At first most people will take out the cheaper insurance plans now on offer that cover just what is no longer free from the NHS, but gradually insurance for most forms of care will become normal. The poor will be left with a limited package of free services of lower quality.

What is available on the NHS should be determined nationally, in a transparent and democratic way, not by unelected local bodies. The bill will allow the secretary of state to deny responsibility when good, comprehensive, free care has become a thing of the past.

More than eight in ten GPs believe that there will be greater rationing of care in the NHS as a result of the financial challenges facing the health service.

Research published this week suggests that 85% of family doctors believe that the government will have to set out more clearly what care is – and is not – freely available on the NHS in England.

A survey of 821 English GPs carried out by the Nuffield Trust, an independent health think tank, and doctors.net.uk found that only half of GPs believe that the NHS will be able to improve efficiency enough over the next five years to avoid having to scale back on the services that are currently funded.

In addition, the vast majority of GPs (83%) believe handing responsibility to local clinical commissioning groups for setting priorities for spending NHS funds will be likely to lead to greater variations in what services are provided to patients throughout England.

Campaign group 38degrees is appealing for donations to place billboard adverts in London to make the ConDems’ attack on the NHS an issue in the elections for the Mayor of London. 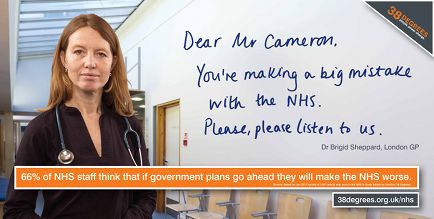 Lib-Dem activists force Nick Clegg to make further demands for changes to the bill. It should be recognised that Nick Clegg is and has been fully supportive of plans to destroy the NHS.

Attempt to appease party faithful comes on day PM asserts: ‘there will be no more big changes’

The future of a prestigious health service which helps children suffering severe abuse is in doubt because of government cuts, a mental health expert has warned.

The Tavistock’s Monroe Assessment Service provides treatment for families going through care proceedings and assesses many children subjected to sexual and physical abuse or neglect.

But a new cap on the amount of funding these expert court witnesses receive has left the prestigious service operating at a loss, and many families without adequate support, a consultant social worker has warned.

Tim Kent said: “We are seeing the highest number of applications for care orders in the family courts for a decade, but the work of expert witnesses has been hit by savage cuts.

“Cases are getting stuck in the legal system and children’s lives are on hold for longer. We fear that the risk of courts making bad decisions about the best interests of the child is growing.