The House of Lords is to discuss and vote on the Health and Social Care / Destroy the NHS Bill today and tomorrow. There are amendments proposed to delay or abandon the bill.

The Con-Dem coalition government – despite obvious evidence to the contrary – claims widespread support amoung medical practicioners for the proposed reforms.

A further letter by accomplished medical professionals – with a few celebrities thrown in for good measure – makes yet another statement of opposition to the bill and urges the Lords to make major changes.

The new Shadow Health Secretary Andy Burnham offers to collude with the ConDems overs Clinical Commissioning Groups if the bill is dropped. I’m surprised at this move and don’t agree with it. I was quite impressed with John Healey who has apparently resigned for family reasons.

Some photos of Sunday’s ‘Block the Bridge, Block the Bill’ protest called by UK Uncut.

A few recent news articles about the UK’s Conservative and Liberal-Democrat (Conservative) coalition government – the ConDem’s – brutal attack on the National Health Service.

The government’s controversial plans to overhaul the NHS are set to be debated in the Lords.

The Health and Social Care Bill would increase competition and give clinicians control of budgets.

The bill has already been substantially altered following criticism from NHS staff and Liberal Democrat MPs.

But Labour peers are expected to table an amendment calling for it to be dropped altogether, while Lib Dems have vowed to push for further changes.

On Sunday, hundreds of protesters gathered on Westminster Bridge in central London to urge peers to “block the bill”.

And last week almost 400 health professionals and academics wrote to peers asking them to vote against the bill, arguing it would do “irreparable harm to the NHS, to individual patients, and to society as a whole”.

The government says the changes are vital to help the NHS cope with the demands of an ageing population, the costs of new drugs and treatments and the impact of lifestyle factors, such as obesity.

The Health and Social Care Bill has been described as the biggest shake-up of the NHS since its creation.

The original plans proved so controversial that the government took the unprecedented step of halting the legislation while it carried out a “listening exercise” with critics – and subsequently altered the bill considerably.

Almost 100 peers have requested the chance to speak during the Lords second reading debate on Tuesday and Wednesday. Peers are set to vote on the bill on Wednesday.

Among them, two crossbench peers – Lords Owen and Hennessey – have tabled an amendment calling for part of the bill to be sent to a special select committee – which allows witnesses to give evidence – for further scrutiny.

They say the bill raises serious constitutional issues, particularly aspects relating to the role of the health secretary in overseeing the NHS and the role of a new body, Monitor, in promoting competition within it.
… (article continues)

More than 60 leading medical professionals have demanded that the Government’s “unpopular and undemocratic” health reforms, which return to Westminster today, be either scrapped or heavily rewritten.

Their call, in a letter to The Independent, increases the pressure on Andrew Lansley, the Health Secretary, who faces widespread opposition in the House of Lords to the planned overhaul.

Signatories include consultants, surgeons, psychiatrists and paediatricians, as well as midwives and family doctors. They have joined forces with public figures including the actors Julie Christie and David Morrissey, the comedian Russell Brand and the fashion designer Dame Vivienne Westwood to demand a halt to the reforms. They say that, despite a series of amendments to the Health and Social Care Bill, Mr Lansley’s plans still do not have the support of the public or the profession.

“It is perfectly clear – as the Prime Minister is acutely aware – that the British public does not support the privatisation of the NHS, and it is a matter of fact that no one ever voted for it, and so this current Bill has no democratic mandate whatsoever,” they write.

They call for the “suspension of, or significant amendment of, the Bill in order that it can be supported by a majority of the medical profession and the British public as a whole, who pay for, support and service our great NHS”. The signatories add: “No one is against reform and change, but the NHS is too important and valuable to our society to be transformed forever in this unpopular, undemocratic way.”

Their letter comes as the Bill returns to the House of Lords where it is due to face concerted opposition, with so many peers requesting to speak that business managers have been forced to set aside another day for the debate.

More than 90 members have applied to speak in the Second Reading debate. Attempts will be made to block the Bill or to delay it by referring key parts to a select committee.

Ministers are expected to offer one concession – an amendment designed to spell out more clearly that the Health Secretary has ultimate legal responsibility for the NHS. But there is growing anxiety within the Government that critics could muster enough support to delay the measure.
… (article continues)

Letters: No one voted for the NHS to be privatised – Letters, Opinion – The Independent

As the House of Lords prepares to vote on the NHS and Social Care Bill, it is clear that medical professionals and the British people – despite a protracted listening exercise by the Government – still do not support existing plans for the NHS.

Despite the Prime Minister’s claims to the contrary, it is public fact that every single Royal College representing nurses, GPs and midwives maintain serious concerns about the Bill. The official policy of the British Medical Association is that the Bill be withdrawn.

Management in Practice – Labour to back CCGs if Bill is dropped

Labour will work with the government to reform NHS commissioning but only if the Health Bill is scrapped.

The new Shadow Health Secretary Andy Burnham has written to the Secretary of State for Health Andrew Lansley, warning the NHS is now in the “danger zone” as he has “failed to build a consensus around his plans”.

Burnham said it is time to “stop digging” and “change course” if patient care is to be protected.

He has pledged his commitment to work alongside the government to develop “true clinician-led commissioning in every locality in England” in return for the withdrawal of the Bill.

Labour believes that such reforms do not need legislation, and could be implemented quickly.

“This approach offers a way ahead that everybody could unite behind,” said Burnham.
… (article continues)

Up to 3,000 protestors, many dressed in surgical scrubs, lay down on the bridge in central London at 1pm as a huge ‘Save our NHS’ banner was unfurled across it.

The demonstration came as the House of Lords prepared to debate the Health Bill this week. 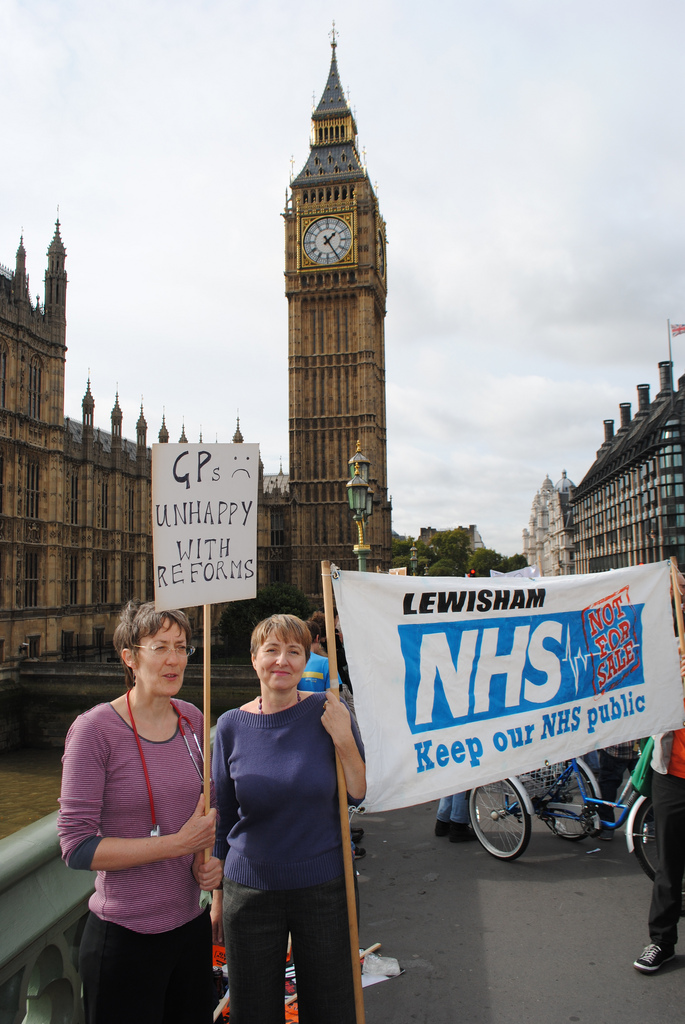 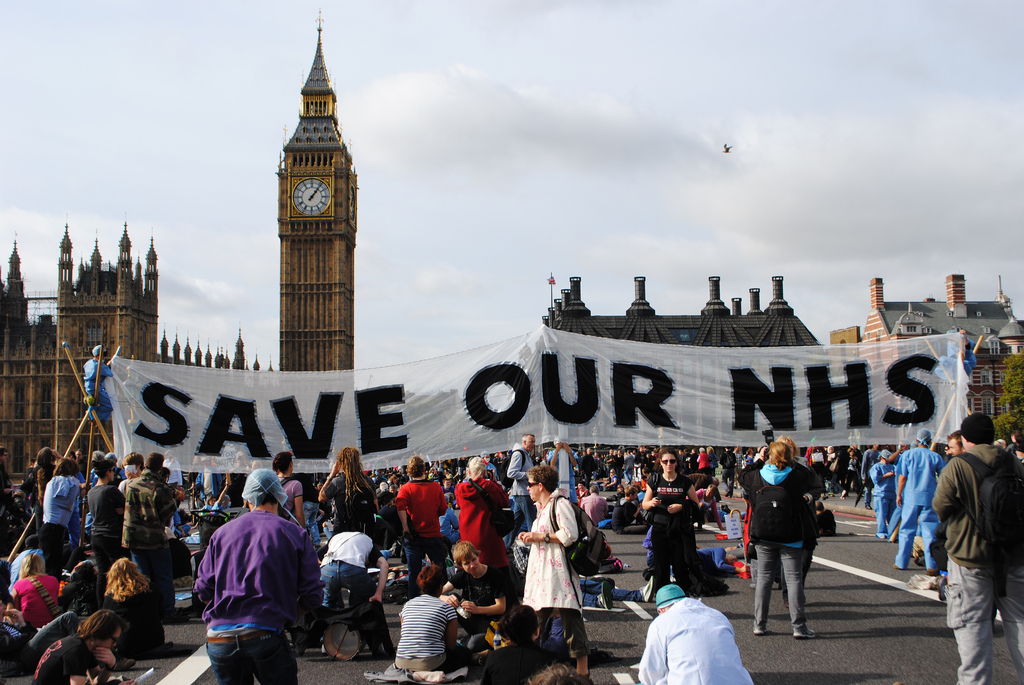 Dr Louise Irvine, a partner at the Amersham Vale Practice, in Lewisham, London said she took part because it was important to show the profession’s anger at the reforms.

‘This Bill has hardly had any scrutiny, it has been rushed through,’ she said. ‘Many MPs have said they didn’t have time to study it properly.’

The reforms were the ‘biggest change to the NHS since it began’, Dr Irvine warned. She argued that the government had no mandate for the reforms, and was trying to implement changes in the face of huge opposition from NHS staff and healthcare organisations.

Dr Irvine said she hoped the House of Lords would delay the Bill for so long that it would run out of time, or throw it out.

‘I’m worried about privatisation and fragmentation of health services, the huge transaction costs of running a market, the loss of accountability of the secretary of state, the postcode lottery as clinical commissioning groups decide what services are available on the NHS,’ she said.

Dr Irvine warned that if the range of services available on the NHS became more limited, patients may be forced to take out private health insurance as a back-up to NHS healthcare.

Dr Julia Hodges, of the Villa Street Practice in Southwark, London, said: ‘Andrew Lansley likes to make out that GPs are backing the Bill and support what he’s doing, but all the surveys of GPs’ attitudes show 60 to 70 per cent do not support it. So it was good to be able to put people straight. I worry our relationship with patients will suffer because of the reforms. They will ask if their GP is benefiting financially from the way they refer. I worry answer may be ‘Yes’ after the Bill.’

But a DoH spokeswoman rejected fears about the NHS reforms. ‘Claims that we aim to privatise the NHS amount to nothing more than ludicrous scaremongering. We have made it crystal clear, time and again, that we will never, ever, privatise the NHS,’ she said.

‘The reality is that we’ve protected the NHS budget, we are giving more power and choice to patients over how they get treated, keeping waiting times low and cutting bureaucracy so more cash gets to the front line.’