Apologies that I’ve not done a NHS news review for a few days – I’ve had hardware/networking problems.

Lansley has called for health care apps – I wonder if Pepsi, KentuckyFriedMSG and McShit will be contributing any advising on healthy eating … 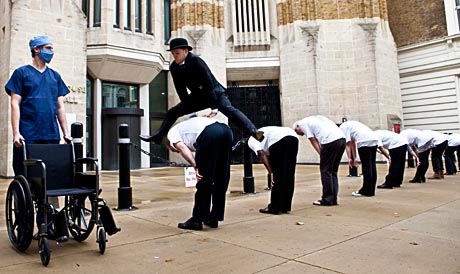 UNISON have been protesting about the introduction of a two-tier NHS. This is clearly an issue of privatising the NHS.

A few recent news articles about the UK’s Conservative and Liberal-Democrat coalition government – the ConDem’s – brutal attack on the National Health Service.

The Department of Health is calling on software developers to create apps for use by the NHS.

Health secretary Andrew Lansley wants medical professionals and software developers to come up with ideas for “apps and maps” that would “help patients make informed decisions about their care.”
…

A protest was staged outside the Department of Health today to call for controversial health reforms to be ditched as they allow private patients to “leapfrog” to the front of NHS waiting lists.

Health union Unison, which organised the protest, warned that a lethal cocktail of economic uncertainty, spiralling waiting lists and budget deficits meant it was the “worst possible time” to be pressing ahead with the Health and Social Care Bill, which will bring in a major, untried, untested reorganisation.

The demonstration saw an acrobat dressed as a fat-cat businessman leapfrog a “living” NHS queue straight into the arms of a waiting “surgeon.”

Unison head of health Christina McAnea said: “If the Health and Social Care Bill goes ahead, the outlook for the NHS and patients looks bleak.

“The government’s polices have already led to NHS patients waiting longer, often in great pain, for their operations.

“The Bill will make matters worse by taking the cap off the number of private patients that hospitals are allowed to treat.

“It will be an enormous temptation for cash-strapped hospitals to boost their income by prioritising paying patients, pushing NHS patients even further down the ever-spiralling waiting lists.

“Even 14 of the elite group of foundation trusts ended the last financial year in deficit, which is a grim warning for the future of NHS finances.

“The economic uncertainty and budget deficits add to this lethal cocktail and it should be obvious to the government that now is not the time to bring in this massive, damaging NHS reorganisation.”

Unison said that latest statistics revealed NHS waiting times were increasing, with those waiting six months or more for treatment up by 61 per cent in the last year, while the government’s drive for £20 billion in efficiency savings was said to be leading to ward closures, staff cuts and rationing across the country.
…