The workforce providing vital NHS mental health care services in Epsom and Ewell will be slashed by half.

Fifteen out of 30 community support roles in Epsom and Ewell will go as part of a radical shake-up, which will see Surrey and Borders Partnership NHS trust target services for those with the most severe or complex illnesses.

This is in addition to 30 posts already vacant across Surrey. It is part of a wider plan to save the trust £1.5m.

CROWDS of doctors, nurses and trade unionists marched through Canterbury city centre on Saturday to protest about proposed cuts to the NHS.

CROWDS of doctors, nurses and trade unionists marched through Canterbury city centre on Saturday to protest about proposed cuts to the NHS.

Almost 100 people with banners and megaphones, including members campaign group Stop The Cuts, mingled among shoppers and chanted: “No ifs, no buts, no NHS cuts.”

Chris Weller, chairman of Stop The Cuts, warned “Local services are going to be devastated. In Kent, nine old peoples’ homes are shutting and 1,500 jobs are to be lost at the county council.

With the government forcing cuts of between £15 and £20 billion each year in the NHS, a poll by the NHS Confederation found 63 per cent of healthcare managers put balancing finances as one of the top three issues facing them this year. Thirty-one per cent said it was the most important issue.

Meanwhile 46 per cent put trying to maintain, protect and improve the quality of services in their three most important issues with 19 per cent putting it as the top priority.

The government’s deliberate dismantling of parts of the NHS risks returning healthcare provision back to the grim and unfair days of the 1930s and 40s, one of Britain’s leading doctors has warned.

The sweeping reforms are in danger of turning the service into “an increasingly tattered safety net” for those with complex illnesses such as diabetes and obesity because private healthcare firms will “cherry-pick” patients who are easy to treat, said Dr Mark Porter, the chairman of the British Medical Association’s hospital consultants committee.

Its ability to provide a comprehensive and universal service could be lost because of health secretary Andrew Lansley’s plan to force hospitals to compete with independent, profit-driven providers for patients, Porter told the Guardian.

“There are things that people in Britain want provided by the state, and health is one of them. Every opinion poll of the British public shows that. We don’t want competing police forces or competing magistrates courts, so why is it planned to compel hospitals to compete with each other?” says Dr Mark Porter, chairman of the British Medical Association’s consultants committee.

He reflects the deep anxiety, not just in the BMA but across much of the wider medical establishment, about health secretary Andrew Lansley’s imposition of free-market methods in the NHS in England. If the health and social care bill, currently before the Commons, goes through without substantial amendment, then the NHS will be thrust into a new era in which “any willing provider” – NHS organisations, private healthcare firms or charities – can bid for contracts to treat patients. In addition, hospitals will be obliged to compete for patients and all hospitals will have to become foundation trusts, largely and deliberately outside the health secretary’s control, by 2014.

Porter is adamant that a healthcare system run on a deliberately competitive basis cannot deliver care of a universally high standard, as the NHS seeks to do. Winners and losers are inevitable. He draws a comparison between healthcare and food supply to illustrate what he sees as the folly of the government’s radical restructuring of the NHS.

The future of at least 50 hospitals is under threat from the unprecedented squeeze on NHS finances, evidence shows.

Alarm about cuts to services outweighs all other concerns for senior managers of NHS trusts as they struggle to balance their books, the NHS Confederation says. Worries about finances far outstrip concerns about implementing the Government’s reforms, which some dismiss as a sideshow.

About 70 hospital trusts in England have failed to achieve the financial performance and quality of care necessary to become foundation trusts and “a significant number” have “large recurrent deficits”, according to the King’s Fund. In a report titled Reconfiguring Hospital Services the charity warned of “a downward spiral of falling income, growing deficit and declining quality [which] will cause hospitals to fail.”

The promise of the NHS was a simple guarantee: no matter who you were or where you lived in the country, it would be seen to that you got the best available care. Whenever standards fell short – whenever, in Aneurin Bevan’s phrase, a bedpan was dropped – the echoes would reverberate through Whitehall. Inevitably, there was always an element of myth here, as well as doubts about the centralism involved, but it was precisely by putting the national into the service that the Clement Attlee government removed the financial dimension from medical anxieties.

Mark Porter’s complaint is that the coalition is about to remove the N from the HS. After passing seven years in opposition ingratiating himself with the doctors, Andrew Lansley ought to pay attention to the chair of the BMA consultants’ committee. Damned as “Maoist” by the entrapped Vincent Cable, the big experiment planned will simultaneously attempt a once-and-for-all great leap forward, and a cultural revolution that will smash central authority. The known unknowns are legion. One of the few safe bets is that things will play out differently in different places.

Consider the planned diminution in the powers of Nice, the body established to inject rationality into the drug rationing process. Set aside the overhaul of drug-pricing, and the Lansley plan amounts to leaving GPs to decide whose pricey pills will and will not be funded. Their decisions are not going to be in any way “national”; indeed that is precisely the point. Even without the prospect of outright bidding wars for cheap operations (something Mr Lansley was recently forced to preclude), with the right financial engineering, some doctors may profit from saying no. The greatest hurricane is the proposed regulatory duty to promote competition from “any willing provider”.

Andrew Lansley is to meet local MPs and the council in Enfield, north London, this week in what is being seen as a test case for hospital closures across the country. The Health Secretary has to decide whether to block plans approved by NHS London to close the A&E unit at Chase Farm Hospital, first proposed 17 years ago, and transfer maternity and children’s services to North Middlesex Hospital, six miles away.

He announced a moratorium on closures following the election, after Tory MPs opposed re-organisations across the country during the election campaign. There is now a pent-up bulge of at least 25 planned “reconfigurations”, and the decision on Chase Farm will signal to the NHS whether it can re-organise services to save cash and improve care.

The proposals for Chase Farm are deemed by NHS London to have met the “four tests” laid down by the Government: they are supported by patients and the public; they take account of patient choice; they are approved by local GPs; and they are based on sound clinical evidence. But there is continuing disquiet over a reduction in patient choice.

Plans to reform the NHS could return healthcare provision to the days of the 1930s and 40s, one of Britain’s leading doctors has warned.

Opening NHS care in England to ‘any willing provider’ could result in the closure of local hospitals and see some patients denied care by private providers because they are expensive to treat, he said.

The biggest challenge to NHS managers comes from money-saving measures and balancing the books, a new study has found.

Just under 300 health service chairmen and senior executives said their main concern was keeping their trusts stable in a financial sense.

The NHS has been told to cut between £15bn and £20bn each year from its budget, with unions warning this will mean as many as 50,000 job cuts.

A special mention for Dr. Grumble. Nice post Dr. Grumble and interesting what the cat found. I wish my local authority would pay attention to what you’re saying about parks and green spaces instead of desperately trying to sell off and cover everything in concrete.

Dr Grumble has a Japanese doctor working with him. His name is Ren. The other day he asked Dr Grumble why there are so many parks in London. According to Ren, there are no parks in Tokyo. A quick Google search suggests that this might not quite be true and a look at Google maps seems to show a few patches of green in Tokyo. But a comparison with a map of London suggests that we do have much more green space. Ren asked why. Dr Grumble had to think on his feet. He told Ren it was to do with common land. Ren’s face looked blank. Perhaps they don’t have such a concept in Japan. Grumble needed a more understandable explanation. Quickly he made up a story about the king needing somewhere to go hunting. Ren nodded. That was something he could grasp.
Recently Dr Grumble went to his local forest to protest. He didn’t want to risk the sale of the woods near his home to a private company. A forest is not worth much. Not as a forest anyway. But if you could sell it to be used for something else it would be worth quite a bit more. So, if the local wood were to fall into the hands of a private company, the shareholders would want to make money out of it. You can be sure that they would chip away at any regulations preventing them from doing this. They might not succeed tomorrow or in five years or in ten years but the woods need to be preserved forever. The likelihood is that repeated planning applications would eventually be met with approval for the odd plot of land to be sold off for, say, housing. In this way, bit by bit, over many years the woods would disappear. Once gone they would be gone forever. 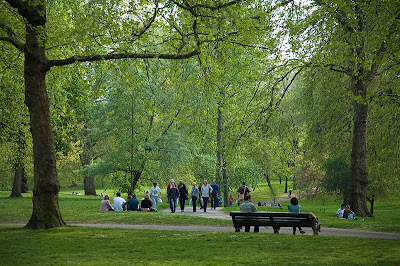 A London park which belongs to the community.

Over the years how many people have fought for the green spaces in London? Dr Grumble has no idea. One thing is certain: if it had been left to the market the green spaces in London would have gone long ago. People out to make money have been been prevented from concreting over our parks and commons. That’s why Grumble did his bit for posterity and protested in the woods.

And who knows? Maybe our London parks have made us money. Maybe that is partly why Japanese tourists like to visit London. Maybe the quality of life our parks and gardens bring even attracts bankers to London. Perhaps even they realise that there is more to life than money. We cannot know. And it doesn’t matter. What matters is that we need these green spaces because we like them and governments have a duty to protect things of value to society especially when, once those things are gone, they are gone forever.

THE STATE WE’RE IN :: Capitalism