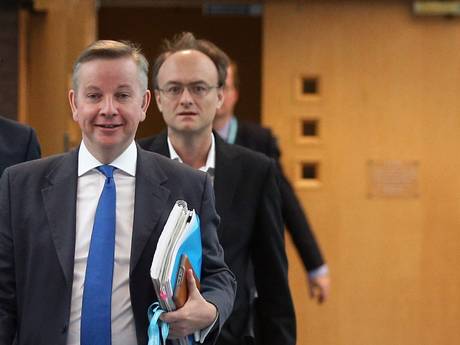 [I had better explain: Choosing that genetics instead of teaching determines educational outcomes supports and perpetuates the idea that poor scum are inferior, inadequate and are to blame for their failure to succeed while rich people are intellectually superior and deserve their superior positions in society. He’s saying don’t bother educating the poor: it’s a waste of money. Educate the rich instead.

It’s extremely ridiculous – bordering on insane – but probably goes a long way to explain why Gove is so hated by teachers.]

The most influential adviser to Education Secretary Michael Gove has penned a report in which he states that a child’s genetics are more important than the teaching they receive.

Dominic Cummings’ 250 page private thesis comes weeks before he is to step down from his post after two years at the Department. In it he attacks a fear of elitism and says that billions of pounds have been wasted on pointless university courses and Sure Start schemes for young children.

Having previously advised Gove before the election, his appointment within the department was blocked by Andy Coulson because he was regarded as untrustworthy.

The report includes a claim that as much as 70 per cent of a child’s performance is genetically derived. He also criticises what he calls a “strong resistance” from politicians to accept “scientific evidence” that is “entirely ignor[ed]” when issues such as social mobility are considered.

What he sees as political pressure to fund scheme such as Labour’s Sure Start is also highlighted. He asserts there is “little scientific testing, refinement and changing budgets to reinforce demonstrated success. Therefore billions have been spent with no real gains.“

He suggests the money should have instead been used to “strengthen world-class humanities, maths and science departments”. However, he slams degree courses at what he calls “third-rate higher education institutions” where  “there is a large amount of ‘social science’ work in economics, anthropology, sociology, literary theory and so on of questionable value both from an intellectual perspective and from the perspective of students.”

Tags: Cameron, Clegg, ConDem spin, Neo-Victorianism, we are not all in this together

The Government are using Brexit to weaken environmental protections