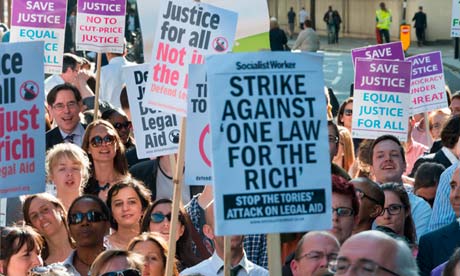 Proposed cuts to legal aid could deny justice to those who need it most, the UK’s top judge has warned.

If people had to drop claims, it would be “a rank denial of justice and a blot on the rule of law”, he said.

The Ministry of Justice said the annual £2bn bill for legal aid was “costing too much”.

“The courts have no more important function than that of protecting citizens from the abuses and excesses of the executive – central government, local government, or other public bodies.”

Warning of the potential harm from government cuts to the legal aid budget, Lord Neuberger said: “Cutting the cost of legal aid deprives the very people who most need the protection of the courts of the ability to get legal advice and representation.”

Tags: attack on benefits, Cameron, class war, Clegg, ConDem spin, we are not all in this together