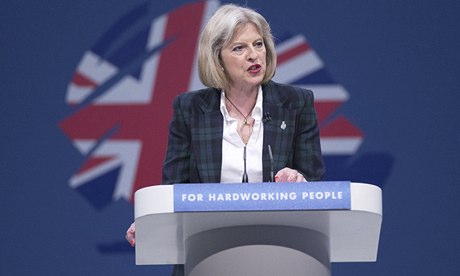 When historians of modern folly write their accounts of our capacity to ignore inconvenient truths, I hope they find the space to mention the performance of Theresa May on BBC Radio 4 on 10 October 2013 .

Britain’s home secretary announced that she was cracking down on the “health tourists” who were using Britain’s hospitals for free. The interviewer pressed her. How much money were these health tourists stealing from our pockets? May did not know. The Royal College of GPs, which ought to know, puts the cost at 0.01% of Britain’s health budget – or next to nothing. When the European Commission asked Britain for proof that sly continentals were sneaking into our hospital beds, Whitehall replied that its demand for hard facts was an affront. “We consider that these questions place too much emphasis on quantitative evidence,” it huffed.

Far from being embarrassed, Mrs May was triumphant. Feelings mattered more than facts. Her job as a senior politician with ill-disguised ambitions to become prime minister was to pander to popular prejudice rather than tell the public the truth.

People feel it is unfair that illegal immigrants can use services, she said. They “feel it’s too easy to stay here illegally”. They had the “feeling that people who are here illegally were accessing services”, she continued, before degenerating into a babble of random noise, from which I just about made out that the “people” who had these “feelings” were, of course “hard working”.

In For the Time Being, Auden has Herod explain why he must save the classical world by killing the infant Jesus. If religion triumphed, “Reason will be replaced by Revelation. Instead of Rational Law, objective truths perceptible to any who will undergo the necessary intellectual discipline, knowledge will degenerate into a riot of subjective visions… The Rough Diamond, the Consumptive Whore, the bandit who is good to his mother, the epileptic girl who has a way with animals will be the heroes and heroines of the New Age”.

Mrs May can make you feel that way, as, indeed, can an hour spent watching prime-time television or reading the tabloid press. As Ukip threatens its core vote, the Conservatives will spend 18 months trying to flatter the deluded into voting Tory by telling them that they are right to put their “riot of subjective visions” before paltry facts.

Auden warned that when populist heroes are worshiped, “the general, the statesman and the philosopher become the butt of every farce and satire”. If our statesmen (and women) choose to put feeling and prejudice before thought and evidence, however, a butt is what they deserve to be. Let us hope they become one. Let us hope that the mocking laughter becomes so loud it drives them out of public life.

Government policies will not get UK to net zero, warns damning report