Iain Duncan Smith and the Tories F*Up again: Training people to use universal credit ‘could cost hundreds of millions’ 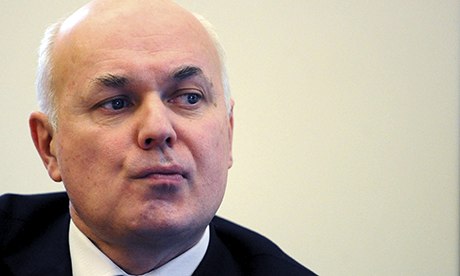 Equipping benefit claimants with the digital and financial skills to use the government’s new universal credit welfare system is likely to cost hundreds of millions of pounds, unpublished research commissioned by the Department for Work and Pensions (DWP) has found.

The study, carried out by three London councils using DWP data and a methodology agreed with Whitehall officials, found they would each need to spend about £6m over a two-year period to support vulnerable claimants to get online, help them open bank accounts and manage monthly budgets.

The research, seen by the Guardian, , reveals the extent to which socially excluded claimants will struggle with the huge cultural and behavioural changes demanded by universal credit, and warns that without help, those who fail to get to grips with the new welfare system will face debts, arrears and eviction, leading to a rise in homelessness.

It suggests councils, charities and private companies will be required to deliver millions of hours of specialist training and support face-to face and over the telephone to ensure claimants are confident and technically proficient enough to use the system.

Around one in 10 users of the system are likely to need intensive or ongoing support, it finds.

The scale and cost will unnerve ministers, who are struggling to roll out the beleaguered £2.4bn universal credit system, and have admitted that they have already written off at least £140m on failed IT systems for the project. Ministers are expected to decide by Christmas whether to write off universal credit altogether and start again, or reduce it in size and complexity to make it more manageable.

Those behind universal credit see it as an opportunity to tackle digital and financial exclusion for up to 8m households. Iain Duncan Smith, the work and pensions secretary, has called it a chance for claimants to “get back in to the 21st century“.

But while they anticipated that this would require some investment, they are understood to be taken aback by the potential size of the support bill – which could reach £100m for London alone – and have ordered departmental analysts to see if it can be reduced.

Under universal credit, six existing benefits will be rolled into a single monthly payment, out of which claimants will be expected to pay rent, spread living costs over a four-week period, and provide regular online updates marking changes in their income and job status. Unemployed claimants will also have to search for jobs online.

This entry was posted in David Cameron, IDS Iain Duncan Smith, Nick Clegg, politics and tagged attack on benefits, Cameron, class war, Clegg, ConDem spin, we are not all in this together. Bookmark the permalink.