Doctors say prime minister’s pledge is unachievable, as analysis shows only 1% of surgeries open all weekend 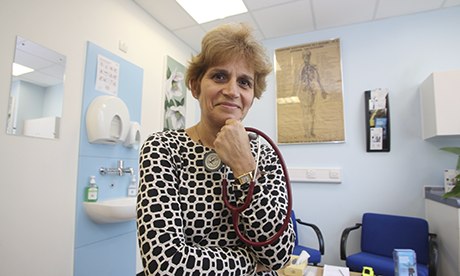 Dr Clare Gerada, chairwoman of the Royal College of GPs said: ‘you do not find a solution by beating us around the head constantly, but by supporting and investing in us.’ Photograph: Frank Baron for the Guardian

Senior doctors have condemned the prime minister’s pledge that GP surgeries will open from 8am to 8pm seven days a week as unrealistic and unachievable, as a Guardian analysis of existing opening times showed that just 1% of practices see patients on both weekend days and three-quarters are shut all weekend.

Those that are open offer access to a GP for on average only three hours and 25 minutes, far less than during an 8am to 6.30pm standard weekday. Three out of four (7,561 – 75.6%) surgeries are shut all weekend.

Even at surgeries that do see patients at the weekend, opening hours can be brief. Although four practices in Sheffield, Coventry, Wirral and King’s Lynn open for 14 hours on a Saturday, the Village Hall surgery in Nottingham is open for just 30 minutes that day. More than 30 others open for an hour or less.

The findings underline the scale of the task David Cameron faces in honouring his promise, which earned widespread media coverage when he announced it at the Tory conference. Millions who find it hard to see a GP at a suitable time would benefit from the dramatic extension of opening hours, he pledged: “We want to support GPs to modernise their services so they can see patients from 8am to 8pm, seven days a week.”

But doctors’ leaders claim there are far too few GPs to staff such an expansion of opening times and the NHS is too cash-strapped to afford it. They have also questioned whether enough patients will want to see a GP outside normal weekday surgery hours, especially at weekends, to justify the move.

Family doctors’ organisations warn that a large majority of patients who visit surgeries during usual weekday opening hours could face longer waiting times and not be able to see their regular GP if ministers press ahead with the plan.

This entry was posted in David Cameron, NHS, politics, The Plot Against the NHS and tagged Cameron, NHS cuts, NHS waiting times, the plot against the NHS, we are not all in this together. Bookmark the permalink.