The exit campaign attributed all everything nasty to Europe. Everything nasty is due to Europe. That’s what they said. They also said that Europe was taking £350 [29/6/16 millions] pounds a week that should be spent on the NHS. It was on their bus. 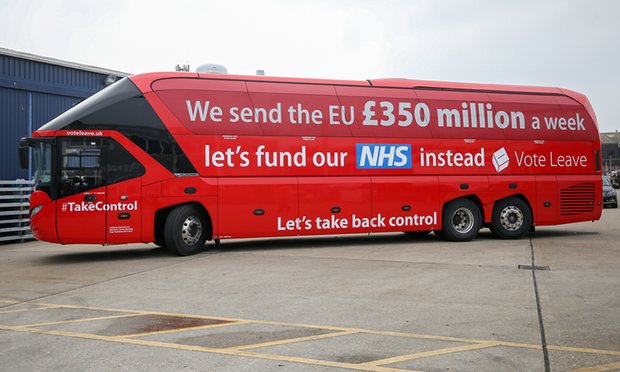 The lying anti-EU bus promoting money for the NHS when all the anti-EU shites are anti-NHS Neo-Liberal shites.

The anti-EU campaigners really did promote everything that you’re pissed off with is the fault of Europe. Many people who voted leave expect EVERYTHING to be returned to some mythical wonderfulness. We want our country back, the outers slogan is taken from the EDL.

ed: UKIP’s Farage and Conservative buffoon Boris are totally opposed to a national health service. Farage and Boris are wealthy, elite C’NUTS who are really into austerity. Boris is a total twat who likes big, expensive toys. Don’t you realise he’s just a rich twat who should just carry on being a rich twat and not bother us with politics? He’s rich enough. Just stay out of it, eh?

ed: Boris, can’t you just find something else to do? Something that suits your level of intellect? Watching paint dry? Watching the tide? Watching flowers grow? Smashing up restaurants – that’s restaurants beneath your social standing of cousre?

Fly fishing? I’m sure that you’d be good at that. It doesn’t matter that you’re crap at that. You can catch a really big one, nobody will know that you’re totally crap at everything.

I’m sorry (except that I’m not). Boris you’re a total twat. Please understand that you are useless at everything. You useless cnut.

OK so you got people to vote to leave EU. Shall I call you a total fake then? You won’t understand because you’re taught at private (public) school that it does shine from your arse. But actually it doesn’t.

Because, actually you’re just an upper-class, privileged twat who has no idea.

ed: I want to make clear that:

The exit_EUers blamed everything on Europe. That was how it was presented. A lot of people who bought that BS/crap will be disappointed in years to come.

This entry was posted in Uncategorized. Bookmark the permalink.