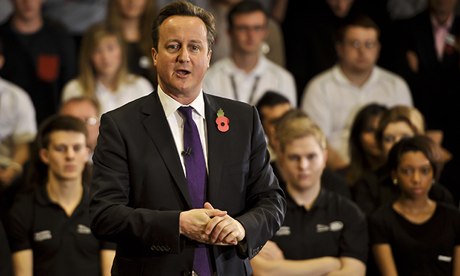 David Cameron has called on the Guardian and other newspapers to show “social responsibility” in the reporting of the leaked NSA files to avoid high court injunctions or the use of D notices to prevent the publication of information that could damage national security.

In a statement to MPs on Monday about last week’s European summit in Brussels, where he warned of the dangers of a “lah-di-dah, airy-fairy view” about the dangers of leaks, the prime minister said his preference was to talk to newspapers rather than resort to the courts. But he said it would be difficult to avoid acting if newspapers declined to heed government advice.

The prime minister issued the warning after the Tory MP Julian Smith quoted a report in Monday’s edition of the Sun that said Britain’s intelligence agencies believe details from the NSA files leaked by the US whistleblower Edward Snowden have hampered their work.

The Sun quoted a “top surveillance source” as saying that terrorists have “gone quiet” after the publication of details about NSA and GCHQ operations.

Cameron told MPs: “We have a free press, it’s very important the press feels it is not pre-censored from what it writes and all the rest of it.

“I don’t want to have to use injunctions or D notices or the other tougher measures. I think it’s much better to appeal to newspapers’ sense of social responsibility. But if they don’t demonstrate some social responsibility it would be very difficult for government to stand back and not to act.”

[I’m surprised that Cameron thinks that censoring the press on these issues is wise. Surely it’s too late for that now? I find it strange that Cameron prefers to pretend that this wholesale and unwarranted spying on whole populations is not happening.]

Tags: we are not all in this together