I’ll be making some remarks on David Cameron’s recent speech on so-called Islamic Extremism. Later on in his speech Cameron says that he wants to do away with this blog under his ‘Extremism Bill’. edit: He doesn’t actually say this blog but

“First, any strategy to defeat extremism must confront, head on, the extreme ideology that underpins it. We must take its component parts to pieces – the cultish worldview, the conspiracy theories

we should together challenge the ludicrous conspiracy theories of the extremists. The world is not conspiring against Islam; the security services aren’t behind terrorist attacks

Second, as we counter this ideology, a key part of our strategy must be to tackle both parts of the creed – the non-violent and violent.

This means confronting groups and organisations that may not advocate violence – but which do promote other parts of the extremist narrative.

We must demand that people also condemn the wild conspiracy theories, the anti-Semitism, and the sectarianism too. Being tough on this is entirely keeping with our values.

We need to put out of action the key extremist influencers who are careful to operate just inside the law, but who clearly detest British society and everything we stand for [Tory values]. These people aren’t just extremists. There are despicable far right groups too. And what links them all is their aim to groom young people and brainwash their minds.

So as part of our Extremism Bill, we are going to introduce new narrowly targeted powers to enable us to deal with these facilitators and cult leaders, and stop them peddling their hatred.

As I said, this is not about clamping down on free speech. It’s just about applying our shared values uniformly.

This blog peddles conspiracy theories and claims that security services are behind terrorist attacks.

Sorry Cameron, you’ll be imprisoning me. 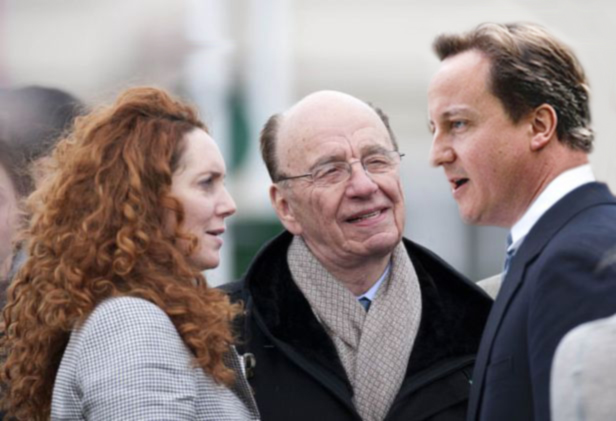 It’s great to be here at this outstanding school, Ninestiles School. Your inspiring teachers and your commitment to British values means you are not just achieving outstanding academic success, but you are building a shared community where children of many faiths and backgrounds learn not just with each other, but from each other too.

Politicians giving speeches at schools is out of order. While they’re guaranteed an audience it’s insulting and disrespectful to the school-students involved. There is an authoritarian regime in schools where students are ordered about and they follow those orders. Their human rights are not recognised. The students didn’t realise they could turn around and say “Fuck off! I’m not listening to that asshole” because of course they can’t. It’s lucky no politician tried that while I was at school.

Blair used to do it a lot – probably because he’d never get an audience towards the end of his reign. He’d go to a school and avoid any eye contact with the students – that’s one of the things that put me onto him and his evil ways. Why was he avoiding eye contact?

Blair went to one school and was booed by the students. He was so deranged and divorced from reality that his aides persuaded him that they were doing some youth-speak “Boom” showing respect for him. Twat.

And that goes right to the heart of what I want to talk about today.

I said on the steps of Downing Street that this would be a ‘one nation’ government, bringing our country together.

That’s total bullshit then. It’s four or five nations for a start. What about the Evel measures Cameron was pursuing? That’s certainly very divisive.

Today, I want to talk about a vital element of that. How together we defeat extremism and at the same time build a stronger, more cohesive society.

My starting point is this.

Over generations, we have built something extraordinary in Britain – a successful multi-racial, multi-faith democracy. It’s open, diverse, welcoming – these characteristics are as British as queuing and talking about the weather.

It’s not welcoming, is it?

It is here in Britain where different people, from different backgrounds, who follow different religions and different customs don’t just rub alongside each other but are relatives and friends; husbands, wives, cousins, neighbours and colleagues.

It is here in Britain where in one or two generations people can come with nothing and rise as high as their talent allows.

So as we talk about the threat of extremism and the challenge of integration, we should not do our country down – we are, without a shadow of doubt, a beacon to the world.

And as we debate these issues, neither should we demonise people of particular backgrounds. Every one of the communities that has come to call our country home has made Britain a better place. And because the focus of my remarks today is on tackling Islamist extremism – not Islam the religion – let me say this.

Hmm, Muslims are the one religion that is seriously discriminated against. I happened across a couple of Muslim school students who were about fourteen the other day. I was cycling through a park and they had to move out of the way for me to pass through the gate to leave the park. We exchanged a few words. They were ashamed. I regret not making an issue of telling them that they had nothing to be ashamed of. This is what it’s all about – it’s young Muslims who will be [ed: relentlessly] bullied by school authorities – they’re not ever going to have a break, are they? That seems to me very much like a way to create extremism rather than defeat it.

I was thinking about whether these “our values” actually exist and who is Cameron to define these “our values”. I was intending to argue that there is no consensus since we are so diverse as Cameron has already said and that I share very few values with Cameron. Values are different from beliefs and I should think that values probably follow from beliefs. It follows that since peoples’ beliefs are different then they have different values. I think that’s about right. What about you?

Take for example a religion that promotes the idea that all other religions are inferior – that all others not following that particular religion are animals or beasts in human form, sub-human. Now if you had accepted such beliefs, wouldn’t values follow? and wouldn’t behaviour follow from those values?

So, my proposition is that there are no such “our values”.

What are these “our values”?

But you don’t have to support violence to subscribe to certain intolerant ideas which create a climate in which extremists can flourish.

Ideas which are hostile to basic liberal values such as democracy, freedom and sexual equality.

Surely Cameron must mean pretend-democracy, pretend-freedom and not even pretend sexual equality. Cameron, former PM Tony Blair and former Resident Dubya Bush are Neo-Conservatives. Neo-Conservatives follow the anti-democratic and illiberal philosophy of Leo Strauss that it is necessary to deceive to rule. It would seem that Cameron is proposing that “our values” includes support for an obvious sham-democracy that is maintained through dissembling and deception.

Ideas – like those of the despicable far right – which privilege one identity to the detriment of the rights and freedoms of others.

Like the religion I mentioned earlier and this speech and the proposed Extremism Bill and Neo-Conservatives.

Cameron fights for his brutish values – more Islamophobia and war