Thursday, December 18, 2008 – Danger of dust explosions on the London Underground

� January 10, 2006 – Danger of dust explosions on the London Underground

What is a dust explosion?

In the last 20 years industrial dust explosions have accounted for several hundred deaths and hundreds of millions of dollars of insurance money and yet they are one of the least recognised of industrial fire hazards. They can occur within any process where a combustible dust is produced, and can be triggered by any energy source, including static sparks, friction and incandecent material.

There are a few basic rules to observe to see whether a dust is capable of causing a dust explosion:

London Underground does not recognise tunnel dust as a potential fire and explosive hazard.

Mike Strzelecki, LUL: It’s dust, it’s caked on dust, it’s a mixture of iron from the action of the rail on the wheel and vice versa, it’s human dust in terms of skin and hair particles which we all shed routinely, and it’s quartz from the brake locks on trains. Now, a lot of research has been done into this over the years, including very recently, indeed we had an Institute examine all the research that’s been done to determine whether this stuff is dangerous to people’s health or not, and the answer is that there is no evidence that it is, and the most sort of compelling evidence that it isn’t, is that the staff who work on the underground who are obviously are in the underground environment much longer than customers, there is no evidence of any medical problems occurring from long hours and many years of exposure, working in the underground.

Eric Ollerenshaw: Is there a fire risk?

Having reviewed available evidence – concentrating particularly on incidents in 2003 – this article calls for an urgent investigation into the fire and explosive dangers of tunnel dust on the London Underground.

London Underground have conducted inquiries into the possible dangers of breathing tunnel dust. These inquiries provide an insight into the composition of tunnel dust. Care should be taken in evaluating the findings since the studies concentrate on suspended dust in stations and drivers’ cabs. It is likely that the dust actually inside the tunnels is different since it is a different environment. There is little movement of air, tube trains travel along sections between platforms and dust probably accumulates in the deeper parts of tunnels. Tunnel dust may have a higher iron content from wear of the rails and wheels and less organic content from passangers clothes, etc.

Studies into London tube tunnel-dust reveal that it is composed of iron, silica and organic products. Different studies have arrived at different ratios of these constitiuents with London Underground finding a roughly 50% iron content and a study conducted by IOM finding a 90% iron content.

It is generally accepted that dust must be smaller than 0.1mm in diamater to pose an explosive hazard, with smaller particles being more explosive. The dust inhalation studies on the London tube have been concerned with much smaller particles than this.

Composition of tunnel dust: Samples from station platforms showed that almost all (typically, about 90%) of the dust in the PM 2.5 samples was analysed as iron. There were trace amounts of chromium (0.1 ? 0.2%), manganese (0.6 ? 1%) and copper (0.1 ? 1.5%). No zinc was detected on any of the samples (<0.1%). Quartz, analysed in respirable dust, accounted for only 1-2%; these measurements were approximate, being close to the analytical detection limit.

The distributions from the three stations are remarkably similar, with the data from Hampstead being slightly finer. The median diameter for the dust from Oxford Circus and Holland Park is 0.4µm and for Hampstead 0.35µm. In each case about 80% of the particles have a diameter less than 1µm. Again, note that this underestimates the aerodynamic diameter of the denser particles.

[µm is micrometre – one millionth of a metre (1×10-6 m), equivalent to one thousandth of a millimetre.]

Does it burn? is the big question. If it burns, then it is explosive when suspended or thrown into the air.

Materials that can cause dust explosions:

Tunnel dust silica crystals have a coating of iron on their surface, which makes them less likely to cause fibrotic lung disease.

Since the silica is coated with iron, it will burn.

Have there been dust explosions on the tube?

Eyewitness accounts certainly suggest that there have been many dust explosions on the tube. Witnesses often speak of smoke, dust and fires. There have been many trackside fires. If not dust, then what’s burning? It’s almost as if there’s a conspiracy to deny this real danger to tube users.

Passengers involved in a horrific rail crash on London Underground told last night how they escaped death thanks to a miraculous chain of events after a Tube train lost a wheel and hit the tunnel wall.

Yesterday’s crash, which left 30 people injured and prompted fresh questions about under-investment in rail safety, happened shortly after 2pm as the train was travelling from St Paul’s to Chancery Lane.

Witnesses said sparks flew from beneath the train, which was carrying 800 people, before the three rear carriages left the tracks, bouncing from wall to wall and sending passengers flying from their seats. Last night one man was being treated for a suspected broken leg after being smashed into the opposite side of the train.

Amid scenes of panic as the carriages were plunged into darkness and smoke billowed through smashed windows and doors, some passengers helped others out along the track. ‘I was absolutely panicking,’ said Claire Ellis. ‘I was thinking: this is it, this is the day it happens.’

The hospital said many passengers had suffered smoke inhalation.

Economics student Humaiun Kobir, 25, was on the last carriage. ‘The train was being thrown from side to side, hitting both walls of the tunnel. All the lights went out and thick black smoke was pouring in. I could hear the driver over the radio shouting “Mayday, mayday” then the train stopped.

‘He asked all the passengers to get to the front as quickly as possible. My first thought was that it was some kind of terrorist attack. We were all terrified that another train was going to smash into the back of us. But we knew there was a fire and no one wanted to run into that.’

The driver was treated for smoke inhalation and was breathalysed, but the results were negative.

“When the train arrived at the station I think it came off the track and hit the tunnel.

There was some kind of fire.

Most people’s faces went black and they couldn’t breathe properly.

There was smoke inside the carriage.

We were lucky to survive.

Most of the people in my carriage were crying and praying for survival.

In my carriage there were a lot of kids and they were crying.

The train stopped suddenly and bumped six times before it stopped so people were really scared and didn’t know what was happening.

The driver himself couldn’t even breathe himself. His face was all black.”

“There was an immense vibration and banging as the train shuddered to a halt.

The driver said, ‘Mayday! Mayday!’, then, ‘Help! Help!’ there was a fire at the back of the train, and told everyone to leave as fast as possible.

There were many people panicking in my carriage, which was very full.

The carriage began to fill up with smoke, as did the platform.

And we could see those on the platform running and screaming as we tried desperately to open the doors of the carriage.

I truly thought the sight of the platform filling with smoke might be the last thing I saw.”

More than 90 passengers had to be evacuated from a Tube train and walked to safety through the tunnel following a track fire, London Underground (LU) said.

Fire crews were called to a small track-side fire on the Bakerloo Line at Embankment at about 1340 BST, a LU spokeswoman said.

During the incident, one of the trains stalled in the tunnel and 94 passengers were stranded on board for 40 minutes before being walked down to Waterloo station.

The incident was one of three to affect rail and tube networks in London during the day.

The Rail Maritime and Transport (RMT) union also claimed a “potentially serious” incident was averted on 11 October when a driver decided to evacuate a train and take it out of service because of a defect.

It said the train had a seized axle which could have resulted in a derailment if it had continued, but LU accused the RMT of exaggerating the incident.

Eyewitness Harry Anscombe, 22, arrived at the station at 1015 BST as emergency services pulled up outside. “There were lots of blackened faces and there was one man with bandages on his face and blood streaming down,” he said.

Mr Anscombe asked one of the passengers what had happened, but the man said he did not know because it was “so black down there”. The passenger said the derailment had caused a huge amount of dust to fly up, making it difficult to see.

Why we need an inquiry

Should it be accepted that dust poses an explosive hazard on the London tube, then safety procedures must change. Maintence needs to be performed flawlessly so that nothing disturbs the dust and that there are no sources of heat to ignite it. Drivers and other staff need to be trained properly so that they can better ensure their own and the public’s safety. Drivers need to know that they should not drive through visible clouds of dust.

Ten minutes later, a driver on a following train reported Bethnal Green and Liverpool Street stations were “really dusty and murky”. The controller reports “there might be a problem with the train in front” and the driver replied “it ain’t half kicking up a lot of dust”. It is suggested that the RMT urgently investigates the dangers of dust explosions on the London tube.

Is it fair to assume that smoke is coming from a tunnel?No smoke without fire eh?

LONDON (Reuters) – No one was hurt in an alert that brought fire engines to two London Underground stations on Wednesday, police said.

A spokewoman for London Transport police said firefighters had checked reports of smoke coming from the Bakerloo line, but the incident was not threatening. Fire engines were sent to Oxford Circus and Piccadilly Circus. 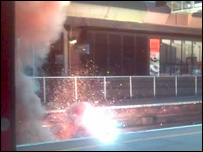 An eye witness described people screaming as the fireball moved along the track at London Bridge station on Saturday afternoon.

Electrician Peter Difolco, 44, was returning from a shopping trip when he said there was a large flash.

“It was like a Roman candle firework, there was lots of smoke and people were screaming and running out the station.”

Mr Difolco, who was with his wife, said he had an idea it was something electrical.

“I had guessed it was something electrical but there were a lot of frightened people.

“There was a small explosion like a firecracker. It went up quite high and started working its way down the track, it went about 120 foot and it lasted for about a minute.

“There were lots of police sirens and then the station was evacuated and staff were comforting people.”

British Transport Police confirmed there was an incident involving a power line at the station at about 1330 BST.

The station closed for about 30 minutes.

There seem to be problems with the nature and the location of the explosives. If they were dust cloud explosions, then they would be over a wide area and there would be no explosives to identify.

Government policies will not get UK to net zero, warns damning report