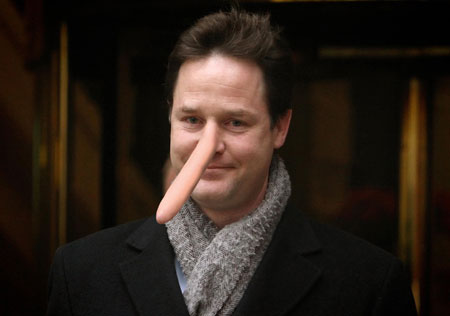 [T]he Lib Dems did not just “join” the tories, they enabled an economically extreme rightwing administration to assume power and achieve objectives that even the previously most extreme version of rightwingedness would never have even tried. As a consequence:

# over one fifth of the NHS is run for profit (but without (say) a Virgin Health or Circle logo, but under the re-assuring NHS banner so we do not notice or worry;

# Royal Mail shares have been sold cheap to enable and ensure that they are quickly sold-on to the venture and vulture capitalists who (at the last count) recovered over a 500% ROCE from buying and destroying the Dutch equivalent;

# Over £20bn of “other” state services have been handed over to for-profit operations, with over £15bn more planned over the next 12 months;

# 500,000 fellow citizens depend on food-banks for at least three days in every month.

# One million children have since May 2010 entered poverty “the scar that demeans Great Britain”.

None of this would have happened had the Lib Dems more conscience and honesty than a lust for power and chauffeured cars.

Tags: attack on benefits, Cameron, class war, Clegg, ConDem spin, the filthy rich, we are not all in this together

Iain Duncan Smith and the Tories F*Up again: Training people to use universal credit ‘could cost hundreds of millions’