Two main political news stories from yesterday dominate today’s news: the Gibson report and the completion of the trial of the murderers of soldier Lee Rigby. There was also a ceiling collapse at the packed Apollo theatre in the Soho area of London.

Unfortunately for previous and current governments and particularly Jack Straw evidence of renditions by the UK and UK complicity with torture come to light while the report was being conducted. While Blair’s government repeatedly denied being involved in torture and rendition the wording was always very carefully crafted and it was obvious that the Fascist bstards were at it.

A further unfortunate consequence for Blair’s former cabinet and government is that cabinet ministers are jointly responsible according to UK law. The current UK Conservative-Liberal-Democrat (Conservative) coalition government is keen deal with this problem. It is likely that they would ideally like to postpone it indefinitely so that by the time it’s addressed Blair and his associated Fascist scum will be dead of old age. Accordingly they have broken commitments to appoint a judge-led inquiry and instead have referred it to the intelligence and security committee of selected MPs and peers, a body renowned for ignoring official crimes.

Secondly, the trial of the brutal murderers of soldier Lee Rigby in Woolwich, East London finished yesterday. Soldier Lee Rigby was first run over by a car before a meat cleaver was used to hack at his neck. Early news reports were wrong claiming that he had been decapitated.

An emergency meeting of Cobra was held because of the political nature of the murder. The murderers asked bystanders to film them explaining their purpose. It was both a brutal murder and a political protest. It was not terrorism because ordinary people were not the target. 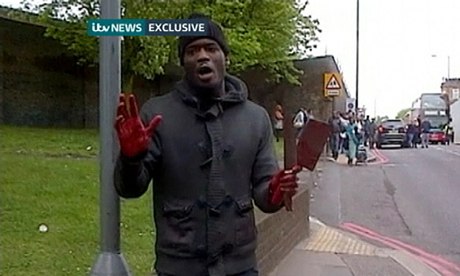 Adebolajo actively sought out a witness with a camera phone to deliver what he saw as a 21st-century press conference. It was supposed to be his martyrdom video. But there were no satellite trucks or television crews, only a handful of bystanders armed with a smartphone.

“The only reason we have killed this man today is because Muslims are dying daily by British soldiers,” said Adebolajo into the lens of a BlackBerry, his bloodied hands still holding the meat cleaver and butcher’s knife used to slaughter his victim. “By Allah, we swear by the almighty Allah we will never stop fighting you until you leave us alone.”

The murderers were driven by Western invasions of Muslim countries claiming that they were soldiers attacking another soldier. I disagree with a psychiatrist’s decision that one of the defendants was not insane. The barbarity of the act shows that he was insane.

I am willing to discuss these issues in the comments.