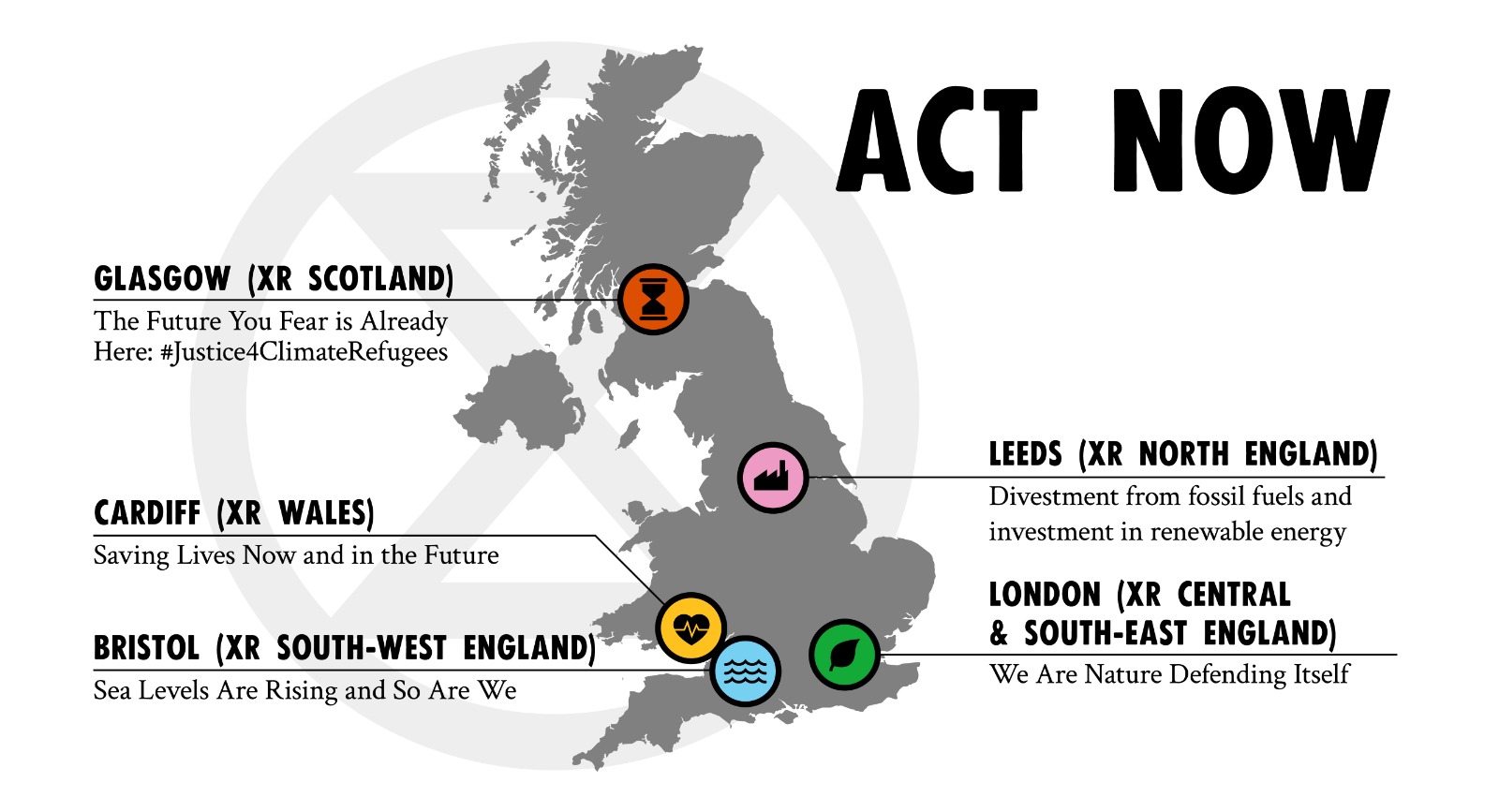 Marking the beginning of preparations for Extinction Rebellion’s next International Rebellion which will begin on Monday 7 October 2019, the Summer Uprising will follow on from this weekend’s East London Uprising.

Each site will have family-friendly spaces, live music, print workshops, speeches and more. Everyone is invited to join this exciting coordinated Summer Uprising in the city of their choosing:

In Bristol the focus will be on rising sea levels. This reflects the city’s maritime history and its risk of floods, which NASA research warns are likely to be a regular occurrence by 2050 if climate breakdown isn’t urgently addressed. 22,300 residential Bristol properties will be at risk, and flooding is likely to affect power stations.

Russell Arnott, 38, Oceanographer, University of Bath
“We are taking action in Bristol to tell the Government to act now on climate change and ecological breakdown. Average sea levels have risen by 23cm since 1880 with devastating consequences. This is causing destructive erosion, flooding, more frequent hurricanes and powerful storms, killing and displacing millions worldwide. We have to wake up to the facts. This is a crisis to deal with, here and now.”

Cardiff will be transformed by the arrival of concerned citizens from across Wales who are determined to highlight the need for the Welsh Government to dramatically accelerate its actions in tackling the climate crisis and ecological emergency.

They will be occupying a central space in Cardiff – meeting from 11am Monday outside Cardiff National Museum. Dressed in yellow, protestors will represent dead canaries inspired by the words of Irish President Michael D Higgins, “If we were coal miners we’d be up to our knees in dead canaries”. The sixth mass extinction is here and it’s time to act now.

Stephen Lingwood, 37, Extinction Rebellion Cardiff
“People are dying right now of climate chaos in places like India. It’s only going to get worse. We’re at the beginning of the sixth mass extinction and a climate genocide and the government’s inaction is, in my view, criminally irresponsible.”

Glasgow / Scotland’s focus for the Summer Uprising is solidarity with climate refugees. Climate crisis and ecological breakdown are not distant threats: all around the world people are already dying and being displaced. The future effects of the Climate and Ecological Emergency that we in the UK are terrified about – floods, food shortages, droughts and resulting conflicts – are already a reality for millions of people in the Global South/Majority World. The Glasgow event will have live music, a ceilidh, speakers on climate justice and refugee solidarity, and family activities with Wee Rebellion.

Daniel Armstrong, 24, Extinction Rebellion Scotland
“As the climate continues to break down, more and more parts of the world will become uninhabitable. Immigration is already seen as a big issue but it will only increase as more people are displaced. But if you’re faced with unlivable conditions due to extreme weather, food shortages and drought, you have no choice but to leave. From the perspective of my hometown Glasgow, where refugees are welcomed, we stand in solidarity with those affected not just by climate chaos but also those displaced by this global crisis.”

Rebels will target Leeds’ financial sector, which is the biggest and fastest growing outside London, to draw attention to the links between banking and the climate and ecological emergency. Demands will be made for the finance industry to radically clean up its act and invest to be part of the solution, not the problem.

Rev’d Jon Swales (B.A Hons, M.A, MLitt), 41, Leeds
“Too often we remain silent in the face of injustice, oppression and extinction. I will not be silent for the sake of the world’s most poor.

“The Extinction Rebellion protests in Leeds will allow the alarm bell to ring loud and clear in the City in which I live and work. If this call is heeded perhaps we can avert the worst of what is yet to come. I intend to play my part in non-violent and love shaped protest.”

We Are Nature Defending Itself: London (XR South-East England and National)

People are invited to gather outside the Royal Courts of Justice (time TBC) in solidarity with all climate activists defending our planet around the globe. We demand climate justice for all and call on Government to make ecocide law. We stand with those laying their bodies on the line to defend the natural world and commend their courage. We are nature defending itself!

The game changers on climate