A toxic mixture of policy by soundbite, twisted statistics and a spurious belief in the efficacy of the private sector has created a programme that is going to fail a whole generation. 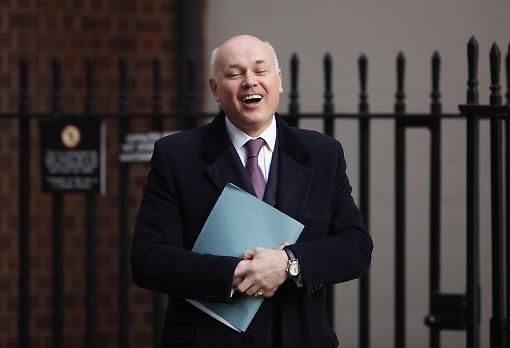 Earlier this year, Cait Reilly, a 24-year-old Geology graduate, won a legal battle at the Appeal Court after claiming that her unpaid work placement at Poundland, which she had been required to undertake in return for continued benefits payments, breached laws on forced labour.

I’m sorry, but there is a group of people out there who think they’re too good for this kind of stuff […] The next time somebody goes in – those smart people who say there’s something wrong with this – they go into their supermarket, ask themselves this simple question, when they can’t find the food they want on the shelves, who is more important – them, the geologist, or the person who stacked the shelves?
It was despicable, if unsurprising, to watch a cabinet minister smearing a young woman who’d been volunteering in her preferred career field. And the second part of his statement was the kind of populist hokum that carries as much intellectual weight as an X-Factor judge’s comments (“Well when there’s an earthquake and you’re buried under a pile of tinned tomatoes in Tesco ask yourself who’s more important THEN? You, or the geologist, or the shelf stacker? Yeah. I don’t know either. Makes you think.”)

But such rhetoric is indicative of Duncan Smith’s modus operandi: policy by soundbite. To quote Jane Mansour, a policy consultant who has been involved in welfare-to-work in the UK and Australia for the last 15 years:

‘Tough’ is consistently used as a synonym for ‘effective’. They are not the same thing. It is unclear how the complexity of issues that underpin worryingly high levels of youth unemployment will be addressed by benefit removal for under 25s, or how any job churn and negative impacts on wages that occur as a consequence will be mitigated.

A considerable amount of research data, particularly that on the value of specific interventions, has been compiled or commissioned by DWP and funded by the taxpayer. Wasting such a valuable resource should be condemned forthrightly […] It’s like deciding to buy a house, paying for a full structural survey, ignoring the issues it identifies, and then building an extension on walls, that (had you read the report you would know) are not strong enough to hold it up.
So it’ll come as absolutely no surprise to hear that – by the DWP’s own reckoning – mandatory work activity schemes such as the one Cait Reilly was supposed to attend are ineffective. That analysis didn’t even mention the impact on disabled people. And it’ll also come as no surprise that the analysis was published alongside an announcement that the department was, erm, expanding the scheme.

Perhaps part of the floundering’s due to the fact Iain Duncan Smith’s trying to solve an impossible problem. You might see him ranting about a something-for-nothing culture, or alleged job snobs like Reilly – but you won’t hear a peep from him about the long-term political and economic failure that’s left nearly five people chasing every vacancy, that saw 4,300 people apply for 150 jobs at Tesco in Gosport and which has left youth unemployment a ticking economic and social time bomb.

Tags: Cameron, Clegg, ConDem spin, Neo-Victorianism, we are not all in this together

NASA: 2014 the Warmest Year on Record