I made clear that I was opposed to Hinkley C. No new nuclear can be permitted anywhere because of the nuclear waste pollution, particularly high-level waste. [ed: the point is that nuclear power is really nasty shit and hugely polluting for essentially ever)

All new nuclear to be stopped now.

[ed: apparently someone has. Authority …

[I have been anti-nuclear since I learned about it in my early teens. All new nuclear to stop and not be completed

Nuclear has always been subsidised by governments. Nuclear is extremely expensive but the real point is that such nasty fantastically toxic pollution should be avoided by not doing nuclear power.

Just checking in and addressing a few diverse issues.

I should really do the long promised Housing Health and Safety Rating System (HHSRS) expo particularly since UK govt is to review the HHSRS scheme in the private rental sector https://www.localgov.co.uk/Whitehall-to-review-health-and-safety-standards-in-rental-sector/46276. I’m very relieved to be moving out of my slum private rented flat very soon.

Council Housing is maintained strictly to HHSRS standards. [21/1/19 Council housing should be maintained strictly to the HHSRS standard i.e. it is the minimal legal standard so councils should meet that standard. The reality is that – no doubt due to austerity – it’s often extremely difficult for council tenants to secure maintenance or repairs to that standard.]  It’s utilitarian but adequate.

Problems with HHSRS in the privare sector are that

Environmental Health Officers (EHO) who enforce HHSRS in the private sector have absolute discretion over the application of HHSRS leading to the very real possibility of corruption. I got the impresson that EHOs were biased and very concerned to excuse landlords from their responsibilities e.g. building regulations. The senior EHO who was attending my slum flat to protect my landlord’s interests was very friendly with him as if they were members of the same club.

The HHSRS scheme is only concerned with appearance and it is perfectly acceptable to EHOs that problems are simply hidden. At my slum flat ceilings and walls damp from the sieve-like roof are hidden behind false walls and ceilings.

[25/11/18 Combi boiler has failed this weekend so no heating or hot water. This was the reason for my first report to EH in Nov/Dec 2 years ago. Attending EHO exercised absolute discretion by deciding that it was acceptable since it worked when she attended. There is some support for that decision since HHSRS is at the time of inspection except that she was biased and quite clearly protecting the slum landlord’s interests.

Combi boiler was installed by an unqualified cowboy* approx 10 years ago. Combi boiler has been unreliable since a ‘service’ a fornight ago. Landlord rushes around to satisfy legalities when expecting a HHSRS inspection i.e. those legalities are otherwise not satisfied. I have had to have HHSRS inspections to force landlord to do necessary repairs e.g. ceiling repair.

*cowboy is a UK slang term for workmen with little training or experience who will take your money for extremely poor service and workmanship.

[28/11/18 I got the message that some people oppose my intended move. I’ll do wtf I like. I  can’t see my current flat existing in five years or so – it is seriously falling away from the rest of the street. The neighbouring property filled a 2″-wide gap recently and I often see new cracks at mine. Need to name my new flat.]

I was successful at a benefit’s appeal on 20 September after it taking about 16 months. The tribunal recommended that I was not reassessed for 24 months from that date. I was reassessed on Thursday, 22 November. I had the same assessor as last time so I had overturned her recommendation at appeal 2 months previously. It appears that the policy is to require appeals because so many claimants simply can’t manage that. I’m expecting it all again.

Lots of Brexit nonsense at the moment. While I am personally opposed to Brexit as a democratic Socialist I feel bound by the vote despite the all sorts of illegality in the Brexit campaign. The Brexit deal choice with one option reminds me of Blair and Campbell.

There are parallels between Brexit and the oppressively intelligent Donald Trump. He was elected and now he’s owned by the Israeli-Saudi Arabian axis. His Achilles’ Heel is fairly obvious – he was in a certain Israeli paedophile’s book of contacts, his daughter’s hinted at it, the way he treats women …

Universal Credit is Iain Duncan Smith’s project to do away with many ‘legacy’ benefits for them to be replaced with one benefit. Affecting low-paid workers as well an non-workers, UC is a terrible mess and not fit for purpose.

It is disappointing that Citizens’ Advice Bureaux have accepted £51M (39?) from the government to advise UC claimants.

Foodbank use to soar after next stage of universal credit, Trussell Trust warns

GOVERNMENT plans to move more people onto universal credit (UC) could lead to a huge increase in those turning to foodbanks to survive, the Trussell Trust warned yesterday.

Benefit problems are the main reason for referrals to receive emergency food supplies, the trust said, adding that people moving onto UC account for a rising proportion of foodbank referrals.

Waits for the first payment and the shift to the new system have been blamed for causing hardship.

Theresa May lies claiming that austerity is over at her Rich Scum party speech.

“I think we are moving to a position now where it is just not sustainable. It will have to go.”

Mr McDonnell accused Prime Minister Theresa May and the Tories on Saturday of lying in their claim to the public that austerity has ended.

The shadow chancellor, who spoke at an anti-austerity rally in Pudsey, Leeds, told the Morning Star: “We will be holding the government to account. This is the third time in two years the government has announced the end to austerity.

“The Institute for Fiscal Studies has said that 75 per cent of welfare cuts are still to come, so if they are serious about ending austerity, in his coming budget Philip Hammond should get up and announce the end of cuts to welfare.

“He clearly will not — and we will be exposing what is effectively a lie.

“Three times they have announced the end, yet there are still cuts coming to welfare benefits, school budgets and local authority budgets in particular.”

Human Rights are great and deserve celebrating and dancing. Human rights are about treating people with respect and decency. Let’s celebrate them and dance.

The trouble is that I take it for granted. It’s clear to me, I understand it, the way it works.

There is a small minority in charge – a priveliged elite – who keep it that way. Ignorance is ever so wonderful for them.

later: they do all sorts of manipulation to maintain their control

I am proud to say that I have been on protests with Ian Bone. It’s very unlikely that he will recognise or know who I am. As a Socialist, I have respect for him.

(Just(…) like myself, he is a political activist). Respect.

15/9/18 Ian Bone was in the news recently for shouting at Jacob Rees-Mogg’s children. Watching the video of the incident, it is clear that Rees-Mogg, an adult responsible for his children was unconcerned and made no effort to get them away. It’s also clear that Bone is addressing the children to make his points. Privileged upper-class twats should be aware that they are hated (the adults I mean).

NHS spending on care provided by private companies has jumped by £700m to £3.1bn with non-NHS firms winning almost 70 per cent of tendered contracts in England last year.

Private care providers were awarded 267 out of a total of 386 contracts made available in 2016-17, including the seven highest value opportunities, worth £2.4bn.

Richard Branson’s Virgin Care scooped a record £1bn worth of contracts last year, meaning the company now has over 400 separate NHS contracts, making it the dominant private provider in the NHS market.

The extent of Virgin Care’s portfolio has angered campaigners, as the company pays no tax in the UK, and its parent company is registered in the British Virgin Islands – a tax haven.

Parasitic capitalism is killing the NHS

Private companies are sucking the lifeblood out of the health service, writes Kane Shaw. 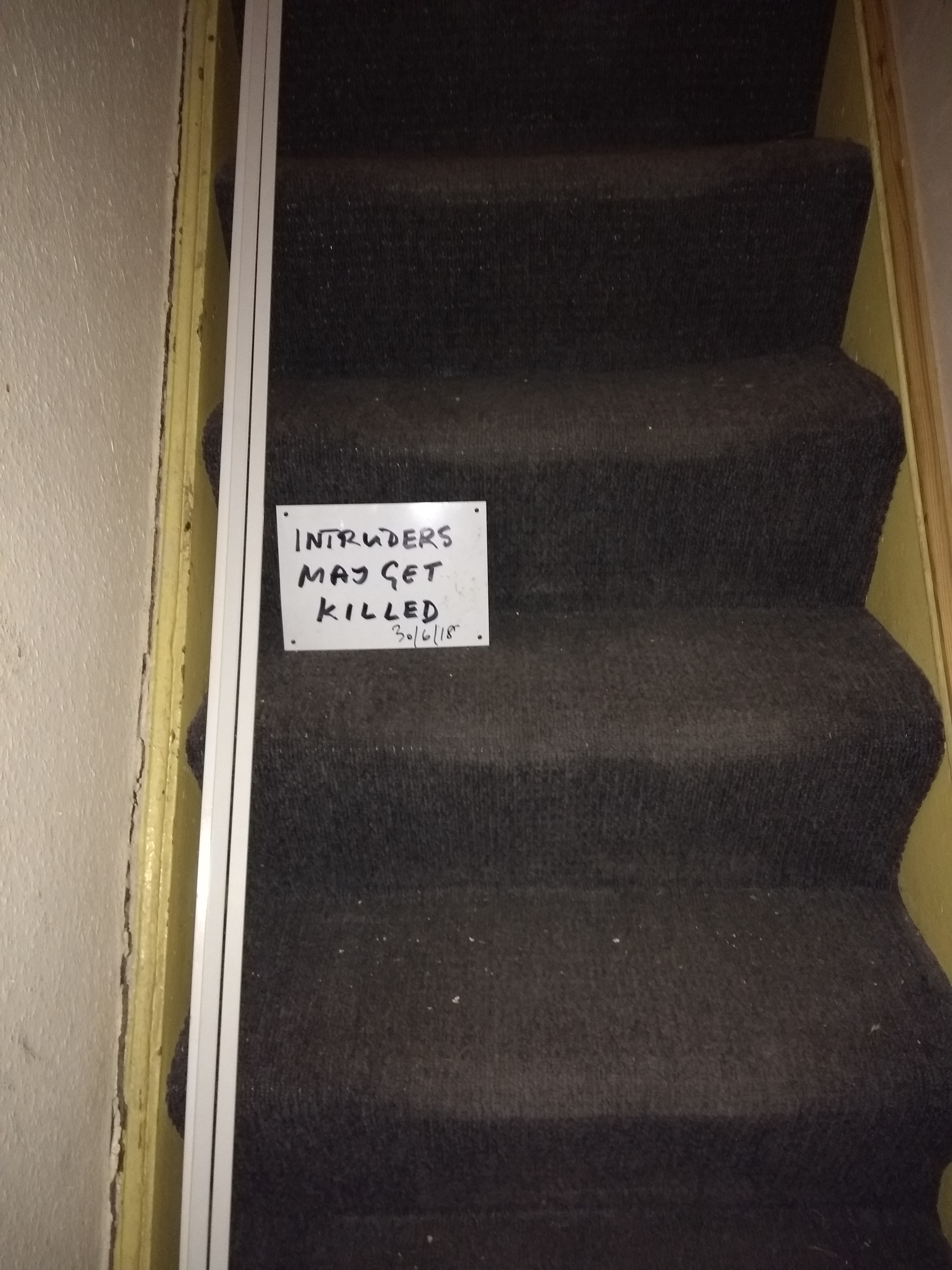 My landlord is a total asshole. I’ve changed the lock to keep him out but I had to leave builders here Thursday. My ‘personal’ disappeared last night and I have suspected him of coming in at 3 or 4am previously. I am not going to restrain myself if I find anyone uninvited in my bedroom at that time.